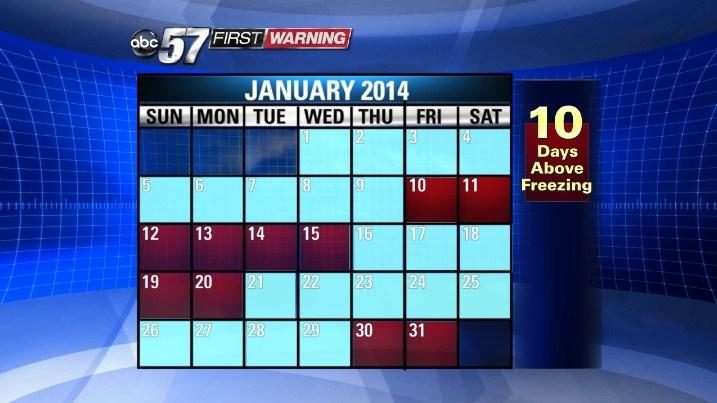 SOUTH BEND, IN - January 2014 left Michiana shivering in her wake as more than 21 days failed to make it above freezing.  Not only did she leave us in the cold, she also left us under a blanket of snow.

The start of the new year left us questioning if this month was going to be a repeat of the frigid nightmare that was January 2014.  There was that 11-day stretch this month in Fig. 2 where the teal boxes that represent the number of days that did not make it above 32°.  In Fig. 1, January 2014 was dominated by the teal boxes, leaving just 10 days above freezing for the month.  Meanwhile, January 2015 has already seen 9 days above 32° and we are continuing to track a warm-up in your ABC57 First Warning Neighborhood Forecast as shown in the forecasted highs in Fig. 3.

Not only are we seeing a difference in temperatures, we are also noticing a big difference in the amount of snowfall.  This week last year, we saw almost a foot of snow, meanwhile we've only seen a couple flakes this year (Fig. 4).

Thankfully, after a cold and snowy start to 2015, we've seen a shift to warmer and drier conditions.