Aaron Hernandez note to fiancee: 'I told you what was coming indirectly!' 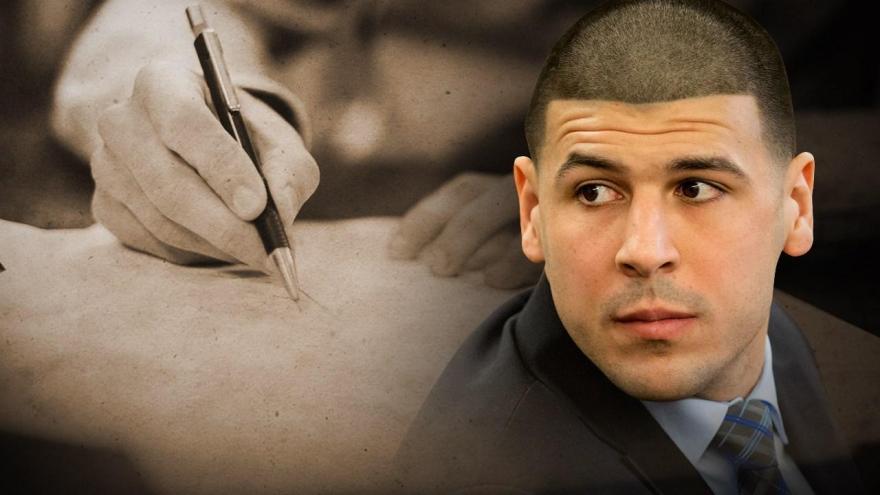 (CNN) -- In a note to his fiancee that was found in his prison cell after he hanged himself, Aaron Hernandez had one final message: "I told you what was coming indirectly!"

In another part of the letter, he wrote in a parenthetical aside "(YOURE RICH)."

Those lines are part of a handwritten suicide note that prosecutors included in a legal filing in Bristol County Superior Court on Friday. Investigators have said three handwritten notes were discovered in his cell when he was found hanged.

State prosecutors are hoping to use the letter to argue that Hernandez's murder conviction should not be vacated in the wake of his suicide, as it would "reward the defendant's conscious, deliberate and voluntary act," according to a court filing.

The handwritten note is largely a personal letter of love to his fiancee Shayanna Jenkins-Hernandez, and even references the Savage Garden song "I Knew I Loved You."

"Tell my story fully but never think anything besides how much I love you," Hernandez wrote in the note. "This was the Supremes, the Almightys plan, not mine!"

The filing also contained details of interviews with fellow inmates, including one source who said Hernandez had recently mentioned a "rumor" to the inmate.

"This rumor was that if an inmate has an open appeal on his case and dies in prison, he is acquitted of his charge and will be deemed not guilty," the interview report states.

Massachusetts is one of several states that has recognized a legal rule called "abatement," in which courts throw out convictions for defendants who die before their appeal is heard.

Hernandez was serving a sentence of life in prison for the June 2013 murder of Odin Lloyd when he hanged himself on April 19. A trial date for his appeal in that case had not been set when he died.

Vacating the conviction could complicate legal proceedings for Lloyd's family, who has sued Hernandez for damages in civil court.

Hernandez's attorneys have asked the Bristol County Superior Court to vacate the conviction, which is generally automatically granted, legal experts have told CNN.

However, prosecutors filed a motion opposing the abatement. They argued that abatement lacks any solid historical or legal basis, and added that Hernandez's death technically completed his life sentence.

"A defendant, who can cut off his own criminal appeal by suicide and stall civil litigation by a stay of proceedings and then prevent application of collateral estoppel, has the reins of the entire justice system in his own hands," prosecutors wrote.

The filing also includes interviews with fellow inmates who spoke of their reaction to his suicide.

Inmates who said they were "close" with Hernandez said that in the days after his acquittal of double-murder charges he was "positive and even happily emotional, which was not usual," according to the report.

Those who said they were "tight" or "real close" with Hernandez said he had become more spiritual during his time in prison, and felt his suicide was some sort of religious message, the report states.

The report also states that one inmate said Hernandez had visited his door before lock in and stated, "remember when you die your soul gets reincarnated."

"He was a very spiritual guy who was always quoting the bible," one source who claimed to be one of Hernandez's closest friends said. "Since Friday's verdict he had been talking about the NFL and going back to play even if it wasn't with the Pats."