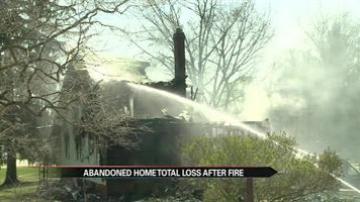 BERRIEN COUNTY, Mich. -- An abandoned home in Milton Township was destroyed by a fire Tuesday afternoon.

Firefighters say there were several factors standing in their way of putting out the flames.

When they arrived, live power lines were sparking around the property. They had to build a barrier and wait until it was safe to fight the fire.

Wind was also an issue.

Niles Charter Township Fire Chief Gary Brovold says they aren't sure what started the fire but it was a group effort to put it out.

"We really don't know too much about it other than the call came into our dispatch said it was an abandoned structure. The call also came into Saint Joe County, Indiana at the same time so we're both responding at the same time," said Brovold.

Brovold said they now need to figure out who owns the home.