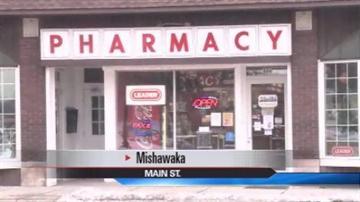 GRANGER, Ind. -- So many people have the flu that it's now hard to get one of the most popular treatments, Tamiflu.

Body aches, high fever, a cough, sounds like a case of the flu. But before running out to the local pharmacy, make sure they still have Tamiflu on the shelf.

"It seems that we can get it in stock, it's just not as high of quantity numbers that we normally have seen,” said Matthew Mahler, Pharmacist at Merrill Pharmacy.

The Walgreens on Ironwood Road said they're running very low.

Others only have one form of the medication- capsules for adults or liquid for children.

The maker of the drug, Genentech, says it's experiencing a delay in shipments.

"It will reduce your symptoms and reduce the amount of time you have the symptoms, but it won't take the flu away completely,” said Dr. Matthew Teters of Memorial Hospital.

It may reduce the misery by a day or so, but is the cost worth it?

"Depending on your insurance plan, if you were to pay out of pocket for it, in other words if you didn't have insurance, it would cost around $110,” said Teters.

Mahler says it's expensive to keep on the pharmacy shelves as well, so they're low to begin with. They only have enough to treat 8 people.

"Cost wise, it's just under $100 to actually keep it on the shelf,” said Mahler.

The drug works best within 48 hours of the first onset of symptoms. So if it's past that- you'll need to call your doctor before going out in public.

"They would prefer you not come in if you have classic symptoms of the flu, unless you are in a high risk group where you might develop secondary complications like pneumonia,” said Teters.

Those high risk groups include babies, pregnant women and the elderly.

Mahler says next year they're coming out with a new type of flu shot called the Quadvalent. It has 4 strains, eliminating the guessing game of which strain is going to hit hardest.