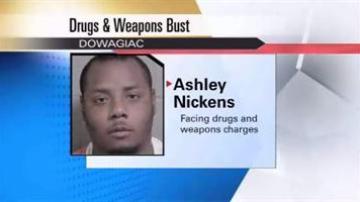 DOWAGIAC, Mich. -- Police went to a home to arrest a man for owing child support but now that man faces drugs and weapons charges.

According to the police, officers found weapons, including a loaded handgun, and nearly 40 bags of marijuana ready for sale.

Nickens is currently being held in the Cass County Jail on possession and manufacturing charges in addition to the weapons charges.