Accused Michigan murderer back in the U.S. 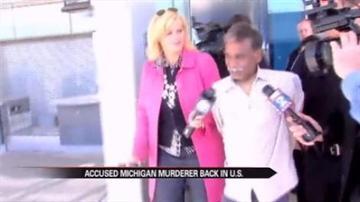 NOVI, Mich. -- A Michigan man accused of murdering his family is now back in the United States.

The Novi father is accused of killing his wife and two kids and was extradited from India.

Police say he was the only suspect in the murder and fled the country the very next day but they vowed to bring him back.

"The FBI has agents located around the world and so our international partners were able to locate him, identify him and apprehend him," said Jeffrey Downey.

The suspect is expected to be arraigned on three counts of first degree murder.

If he is convicted, he could spend the rest of his life behind bars.