Activist not worried about the safety of Benton Harbors residents 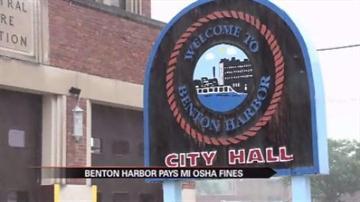 BENTON HARBOR, Mich. -- The city of Benton Harbor has been fined by the Michigan Occupational Safety and Health Administration for public safety violations. One activist says despite the fines, he’s not worried about the safety of the city’s residents.

"There will be more people walking up and down the streets and that's what we want to see is people down here living life."

Pete Jorgenson has been working in the Benton Harbor area for 40 years as a realtor and entrepreneur. He has been a major player in the revitalization of downtown.

"People are wanting to live downtown Benton Harbor again and the residential development is what seems to be leading the market at this time,” said Jorgenson.

But as Jorgenson pointed out, for people to want to live in a city they must first feel safe. And that's something Jorgenson says Benton Harbor is doing right.

Jorgenson says from his viewpoint, the city is finally on the right track.

"Benton Harbor is moving along very well. It takes a long time to raise a village. Especially when you've got to do it over again,” said Jorgenson.

The city negotiated its fines down from $10,000 to $5,000 by agreeing not to appeal the violations and to fix the violations before the end of the month.