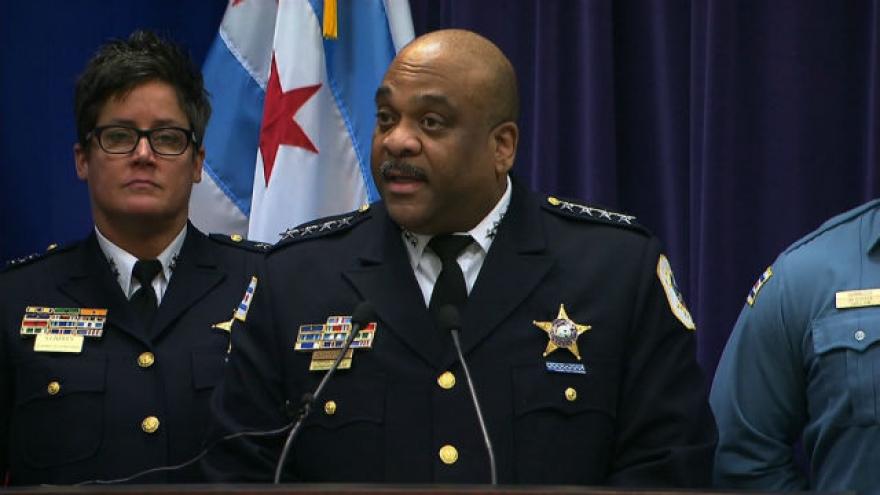 (CNN) -- As a former principal on Chicago's South Side, Liz Dozier fought to turn around a school where gang violence was rampant. After school, she often would march down the surrounding streets as if on patrol, shouting at teens hanging out, "Get out of the street! I'm not gonna say it again!"

Dozier earned the trust of both students and parents in the crime-plagued Roseland neighborhood.

"I used to have people coming to me to talk about who shot so and so," she said. "There's a reason why a parent would come and tell me something and they wouldn't tell the police. They wanted to tell the police, but they didn't trust them."

This distrust of the police remains strong -- particularly in minority neighborhoods -- in a city with a reputation as a murder capital, but many believed an opportunity for change came in the final days of the Obama administration. The US Justice Department and the city agreed to negotiate on a consent decree that a federal prosecutor hailed as a "historic turning point" in the fight against violent crime.

Nearly six months and a new administration later, the much-heralded plan to improve accountability and training on a police force with a history of racially charged abuse appears dead. Instead, reform has largely fallen to the city and police -- without the federal court supervision experts say is needed to ensure lasting results.

"Absent federal court supervision, nothing will improve," said the lawsuit, which is seeking class-action status.

"The City of Chicago has proven time and time again that it is incapable of ending its own regime of terror, brutality and discriminatory policing. It is clear that federal court intervention is essential to end the historical and ongoing pattern and practice of excessive force by police officers in Chicago."

'We all agree reform is necessary'

Chicago Police Superintendent Eddie Johnson and the city's top lawyer, Edward Siskel, said the city has moved ahead with a number of reforms, including a new use-of-force policy implemented after consultation with the community, greater use of Tasers and body cameras and creation of a civilian office of police accountability. They declined to comment on this week's lawsuit.

"We all agree that reform is necessary," Siskel, Chicago's corporation counsel, told reporters Wednesday. "It is matters of process that we are discussing."

Instead, city officials are proposing what critics call a less stringent plan, arguing the new approach is more realistic given the Trump administration's opposition to federal intervention.

The city has asked the Justice Department to have an independent monitor not under court supervision to oversee its reform efforts, mayoral spokesman Adam Collins said.

"We wish that the Department of Justice would have followed through with their commitment to a consent decree, but we are not there," Siskel said.

Justice Department spokesman Devin O'Malley said in a statement last week: "There is no agreement at this time. We look forward to working with the city to finding a resolution that promotes public safety and protects civil rights."

But Craig Futterman, a University of Chicago law professor and member of the legal team behind the lawsuit, said the Chicago Police Department "has proven that it is incapable of remedying its years-long pattern and practice of civil rights violations on its own."

"Addressing those civil rights violations and improving police accountability are critical to public safety in Chicago. Without judicial oversight, we may lose the greatest opportunity for real and enduring change in my lifetime."

The tough-on-crime Trump administration has opposed federal intervention in reforming troubled police departments such as Chicago -- even after a scathing report from the Obama Justice Department earlier this year found that widespread failures by the city's police had eroded its ability to combat crime.

"It's hard to see how you can have a crime-fighting strategy that doesn't address the very serious issues that we found in our investigation that would lead to greater trust between residents and police," said Vanita Gupta, who oversaw the probe as head of the Justice Department's Civil Rights Division under Obama.

The federal investigation found what it called a direct link between the breakdown in police-community relations and violent crime.

So far this year, the city has had more than 280 homicides, according to a tally kept by the Chicago Tribune. Last year there were 786 homicides, a spike of more than 60% over 2015. It was the largest single-year homicide increase in 25 years among the five most populous US cities, according to the Justice Department.

The fatal police shooting of 17-year-old Laquan McDonald prompted the Justice Department to launch its Chicago investigation in 2015 after the case spurred protests and helped fuel a national conversation about officers' use of deadly force.

McDonald, a black teen, was shot 16 times as he walked away from officers in October 2014. His death didn't attract wide attention outside Chicago until 13 months later when a judge ordered the release of dashboard camera footage that contradicted officers' accounts of the shooting.

"In the McDonald video itself, you see the kind of corrosive effect of the community knowing and understanding that the police officers were far more interested in cover-up than they were in what happened to McDonald when he was shot," said Jonathan Smith, former chief of the special litigation section at the Justice Department's Civil Rights Division.

The Justice Department report released in January revealed that excessive force was rampant throughout the nation's second-largest police force. The 13-month investigation found that black and Latino residents were often the targets.

The city's ability to stem the violence was hampered by a "breach in trust," the report said.

Rogue officers were not held accountable despite the fact that "trust and effectiveness in combating violent crime are inextricably intertwined."

In 2016, Chicago police identified suspects in only 29% of all homicides, less than half the national rate for 2015, according to the Justice Department. The majority of the slayings occurred in black and Latino communities, where relations with the police are most strained.

"It's hard to divorce what's happening in Chicago from the fact that our own investigation found a multitude of residents -- particularly on the South Side and West Side -- who refuse to talk to the police because they don't trust them," Gupta said.

During the Obama era, the Justice Department opened 25 "pattern-or-practice" investigations of law enforcement agencies at a time of heightened tension between mostly minority communities and the police. Of those, 14 resulted in consent decrees and one post-judgment order, including the highly publicized agreement with Ferguson, Missouri, after the fatal 2014 police shooting of Michael Brown, an unarmed young black man.

A report published in February by police reform expert Samuel Walker found that most court-supervised agreements from the past two decades were "successful in transforming seriously troubled law enforcement agencies."

"At the same time, there is evidence of some backsliding, and questions remain about the long-term sustainability of court-ordered reforms," the report said.

The apparent demise of Chicago's consent decree could signal how the Justice Department under Attorney General Jeff Sessions will handle accusations of police abuse or misconduct.

In April, Sessions ordered a review of all federal agreements aimed at reforming troubled police departments reached in the Obama era. He has called investigations of law enforcement and decrees "dangerous," saying that federal intervention "can reduce morale of the police officers."

That same month a federal judge in Baltimore approved a consent decree outlining police reforms recommended following a Justice Department investigation spurred by the death of Freddie Gray. US District Judge James Bredar rejected a government request to hold off on approval because of Sessions' "grave concerns" about the agreement.

After the Justice Department's actions in Baltimore, critics were again disappointed when federal prosecutors announced in May there wasn't enough evidence to bring civil rights charges against two Baton Rouge, Louisiana, police officers in Alton Sterling's death. Cell-phone video showed Sterling, who was black, pinned to the ground by white officers before he was shot. Police said he was reaching for a gun, but outrage over his death led to renewed Black Lives Matter protests across the country.

"Chicago is part of a broader pattern in this country, and if you read the findings from Chicago through Baltimore, you see that there are themes in investigations that are very similar around the country in the way force is used and the way communities of color are policed," said Smith, who is now executive director of the Washington Lawyers' Committee for Civil Rights and Urban Affairs.

The Rev. Michael Pfleger, the activist pastor of Chicago's Faith Community of St. Sabina, recalled people pouring into his South Side church last year to recount their encounters with police to Justice Department lawyers.

"We went the whole nine yards to get people to come forward," Pfleger said. "Now we see it was possibly all in vain. That's frustrating. After the Alton Sterling decision, a young person said to me, 'This is why people don't want to waste their time talking to the Justice Department.' "

Still, the fate of an agreement with the feds is far from the minds of Chicagoans bracing for what could be another violent summer.

"Many people feel disconnected from the possibility of the consent decree or what that even means," said Dozier, the one-time Fenger Academy High School principal featured in "Chicagoland," a 2014 documentary on the city's violence that aired on CNN.

"People aren't thinking about consent decrees. They're thinking, 'How can I be safe?' "

In May 2016, one of her former students, Lee McCullum, 22, a hopeful figure in the documentary who emerged from homelessness and gang life, was gunned down on the South Side.

Dozier had an uneasy feeling delivering food recently to a South Side family of a young man who was at Barrett's side when he died.