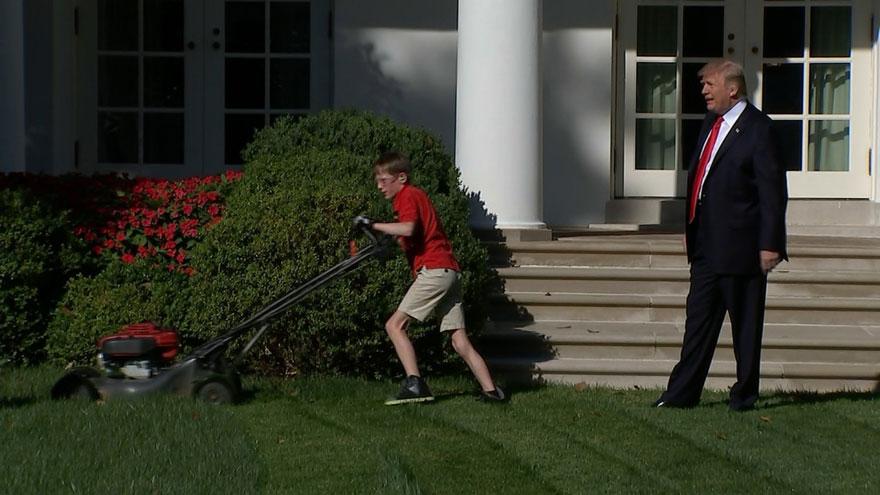 (CNN) --An 11-year-old boy who asked the White House if he could mow the property's lawn was granted his wish Friday.

Frank Giaccio told CNN's "New Day" he even waived his usual $8 fee for President Donald Trump -- even though anchor Alisyn Camerota noted that the billionaire chief executive could probably afford the fee.

"I always wanted to do something big and so I was like, 'Why don't we just start here?' This seems like the perfect example," Frank, of Falls Church, Virginia, told Camerota.

In August, Frank wrote a letter to the President asking if he could be allowed to put his landscaping skills to good use for the White House. In his letter -- read aloud at a briefing by press secretary Sarah Sanders -- he even offered to bring extra fuel and charged batteries.

"I would like to show the nation what young people like me are ready for," Frank wrote at the time.

Asked on Friday why he waived his fee, Frank replied, "My dad said, 'Just do it for free,' and I was like, 'Fine,' and that's where it's gonna go."

Beyond that, he wasn't able to tell Camerota what type of mowing implements the White House staff would supply him with.

But Sanders offered Twitter audience a look at the mower Frank was using, adding that he was "doing a great job."

The President later joined Frank as he trimmed the Rose Garden's grass.

Trump even congratulated Frank on a job well done by giving him a high five, CBS's Mark Knoller tweeted.

After his morning of hard work, Giaccio joined Sanders in the press briefing room, taking care to thank his father, Sanders, Trump "and a couple other people" from the podium.

When reporters asked Giaccio if he'd mow their lawns, Sanders cut in.

"Make sure these guys pay you top dollar. Tell them if you're part of the press, you have a special deal that's double the normal rate," she joked. "I think that's pretty fair."