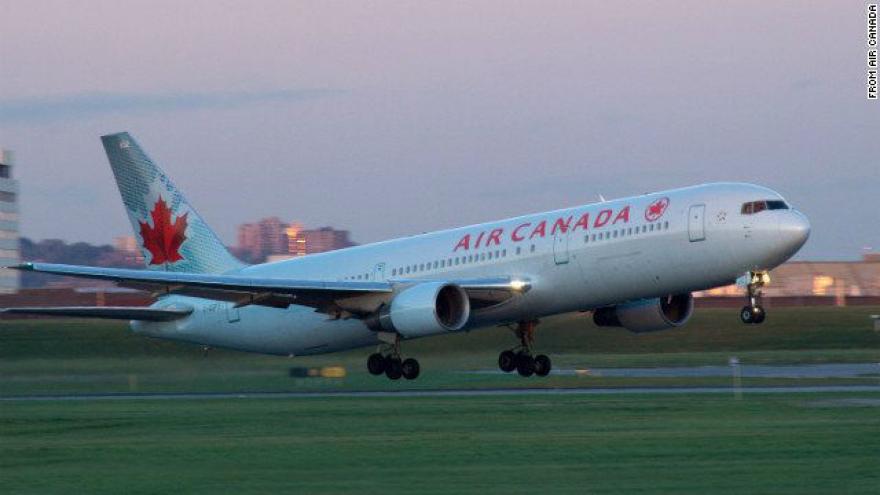 (CNN) -- An Air Canada flight attempting to land at San Francisco International Airport nearly touched down on a taxiway crowded with planes on Friday night, the FAA said in a statement.

Air Canada Flight 759, a 146-seat Airbus A320, was cleared to land on Runway 28R, but the pilot "inadvertently" lined up for Taxiway C, which runs parallel to the runway, according to the FAA. There were four aircraft lined up on Taxiway C at the time.

An air traffic controller ordered the pilots to abort their landing. The flight from Toronto landed successfully without incident on its second approach.

In audio of the incident, the Air Canada pilot spoke to the control tower to double-check its assigned landing runway.

"Just want to confirm, this is Air Canada 759 we see some lights on the runway there. Confirming good to land?" the pilot said, seemingly referring to the aircraft lined up on the taxiway waiting to depart.

"Air Canada 759 confirmed cleared to land runway 28 right," the control tower responded. "There is no one on 28-Right but you."

Shortly after, an unidentified voice can be heard questioning the flight landing: "Where is this guy going? He's on the taxiway."

The air traffic controller told the plane to "go around" and make another attempt at landing.

The Air Canada plane was estimated to have overflown the first two jets on the taxiway by as little as 100 feet, and the third by 200 feet and the fourth by 300 feet as it was climbing, according to CNN partner CTV, citing a preliminary report from the Transportation Safety Board of Canada. The A320 got within 29 feet laterally of the other aircraft.

"Air Canada 759, it looks like you were lined up for Charlie there," the controller said, an apparent reference to Taxiway C.

A United pilot readying to depart for Singapore on the taxiway then messaged to air traffic control: "Air Canada flew directly over us."

"Yeah, I saw that guys," the control tower responded.

A spokesman for Air Canada said it is still investigating the circumstances of the incident. A spokesman for the airport said there would be no further comment.

"We are aware of this incident and are in close contact with the FAA on this," San Francisco International Airport spokesman Doug Yakel said. "As the investigation is still ongoing, we will not be making any additional statements on the incident at this time."

Rare, but disastrous if unchecked

Such incidents are incredibly rare, but could end in disaster if left unchecked. Runways and taxiways have specifically demarcated lighting to provide visual cues to pilots to avoid such incidents, but the dangerous mix ups do happen.

Runway incidents at takeoff and landing still account for the largest portion of aviation accidents.

Nearly 47% of fatalities occur during final approach and landing, according to an analysis of accidents from 2006 to 2015 by Boeing. The newest generation of aircraft now include moving airport maps on their displays to alert the pilot of the aircraft's position relative to a runway or a taxiway.

Companies like Honeywell Aerospace have also developed systems to advise pilots on the ground and in the air if they're approaching a taxiway or a runway, but such equipment is an optional feature on many aircraft.