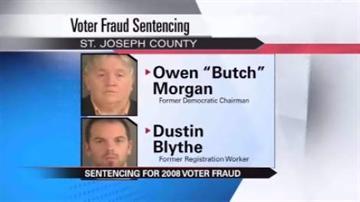 ST. JOSEPH COUNTY, Ind. -- Four people were sentenced in the petition fraud case that stems from the 2008 primary election.

Butch Morgan was sentenced to one year in prison and one year of community corrections for being the ringleader of petition fraud in the 2008 primary election.

The only other one who stood trial was Dustin Blythe.

He was sentenced to one year community corrections and 2 years probation.

All four must each pay a $500 fine and court costs.

The judge said that he would not classify this case as voter fraud-since votes were not cast.

"What I thought he said and what I agree with is Obama still would have been elected president but in this situation the worst that would have happened is maybe Barack Obama wouldn't have been on the ballot for the primary. But he lost the primary,” said Levco.

Representatives from the Saint Joseph County Republican Party were there to react.

"The public trust was violated. Again I think justice was done in this case and hopefully this will send a message to anyone else who might think of doing something because they better think twice,” said Jake Teshka of the Saint Joseph County Republican Party.

The prosecution agreed that everyone should take notice on how this case was handled.

"I would hope that it would be a positive thing that when you do something like this we're going to find out and you’re going to be held accountable,” said Levco.