AM General merger expected to bring hundreds of jobs to Michiana 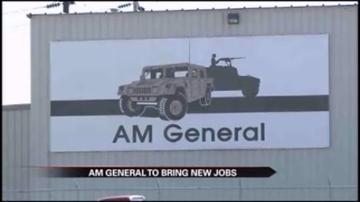 MISHAWAKA, Ind. -- AM General is one of the largest employers in the region, but the demand for the hummers they produce is down worldwide.

So earlier this year, that meant layoffs right in Michiana.

But now, a big announcement is bringing new life as the plant moves into its next chapter.

"It’s anticipated that MV-1 production and sales will stimulate the creation of hundreds of jobs," says Jeff Adams, Spokesperson at AM General.

AM General acquired the company VPG that makes vehicles for wheelchair passengers, called MV-1's. In just 45 days, those MV-1's will be made in Mishawaka.

The new venture is expected to bring hundreds of new jobs with it.

"Now the assembly of the vehicles will continue to occur at AM General’s world class 675,000 commercial assembly plant in Mishawaka," says Adams."Which is fully tooled for the MV1 and ready to resume vehicles. AM General is also planning 100 suppliers of the MV1, to support the accelerated restart of production and sales."

“If there are more jobs in Mishawaka, that means more jobs for workers who live in South Bend and we are all better off," says South Bend Mayor Pete Buttigieg.

The impact will be felt all the way from a boost in tax revenues across the area, to that long awaited paycheck for a new employee.

“When somebody has a job at a facility like that that means they have more money in their pocket to go to restaurants, to go to baseball games, to participate in the economy of the city and that puts us that much further forward as we are trying to grow jobs in the community,” says Mayor Buttigieg.

It is important to note that production on these vehicles starts in 45 days, but that does not mean those hundreds of jobs will be available then.

The company is still trying to figure out exactly how many people they need and where they will need them.

Adams says he hopes these new jobs will be available by the fall.