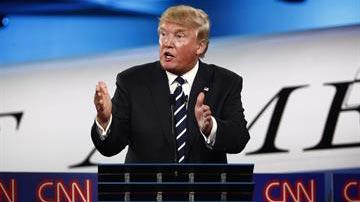 The information, posted on a popular site for Anonymous leaks, also includes phone numbers, home addresses, and other personal information associated with people close to Trump, including his spokesperson, campaign manager and family members.

CNNMoney called one of the numbers from the leaked info that was listed as Trump's family member. The person who answered confirmed his connection to Trump.

A Trump representative said officials are "seeking the arrest of the people responsible for attempting to illegally hack Mr. Trump's accounts and telephone information."

Over the last few weeks, members who identify as part of Anonymous have posted a video condemning Trump.

"You say what your current audience wants to hear but in reality you don't stand for anything except for greed and power," the video proclaims, calling on people watching to take down Trump's website and "dismantle his brand."

Anonymous is a loosely collected group. Some members say they don't approve of the YouTube uploader who initially posted the video condemning Trump. Regardless, #OpTrump is gaining traction.

One member of anonymous told CNN the operation is for "lulz," a term associated with hacking for fun. "We aren't stating that we can stop Trump," the member told CNNMoney. "This operation is basically just to play around with him with some hacking in between."

This type of gathering and posting of personal information is the first step of an attack, security expert David Kennedy told CNNMoney, saying it's likely the group could take down Trump's websites or try to hack information relating to his businesses.