Another migrant caravan is heading to the US., Trump has already taken note 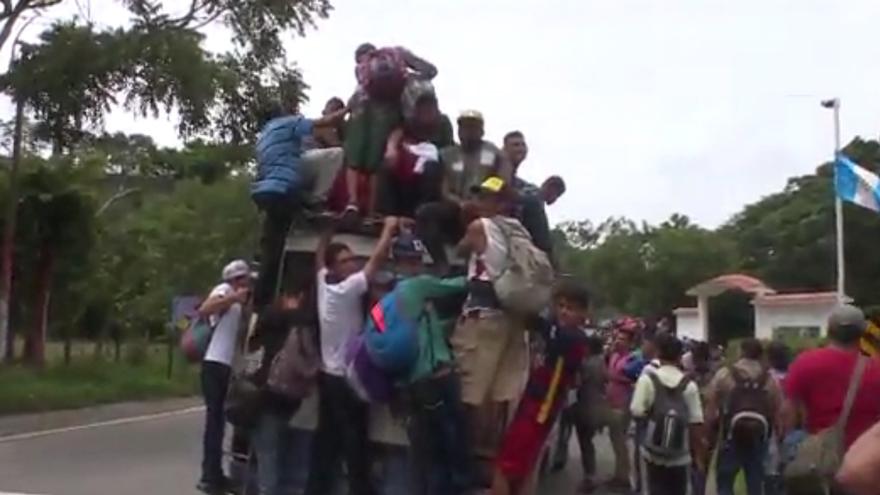 (CNN) -- A new migrant caravan is heading to the United States. And US President Donald Trump has already weighed in, threatening to cut foreign aid to Honduras if the group isn't brought back to the Central American country.

The caravan, which organizers say numbers thousands of people, formed in the Honduran city of San Pedro Sula on Saturday and crossed into Guatemala on Monday.

Guatemala detained one of the caravan's coordinators on Tuesday, a Guatemalan government source told CNN. But other members of the caravan were still trekking north.

The big question: Will authorities detain them before they reach the US border?

The caravan met a police blockade in Guatemala

Members of the group told CNN en Español that they decided to join the caravan and head to the United States because of insecurity and a lack of jobs in Honduras. Many are traveling with children in tow.

As local media documented the first steps of the group's journey over the weekend, government officials across the region spoke out, advising them to turn back.

The US Embassy in Honduras warned of the dangers of the journey and noted that the United States would enforce its immigration laws. Mexico's foreign ministry released a statement noting that travelers should consult its migration laws before trying to enter.

"Please bear in mind that current legislation does not permit entry into Mexico if requirements to travel to a neighboring country have not been met," the statement said. "To avoid surprises, please inform yourself before starting out."

But the caravan continued undeterred.

Police in Esquipulas, Guatemala, about 10 kilometers (6 miles) from the border, blocked their path for nearly two hours on Monday, according to local media reports, but eventually allowed them to continue their journey after the migrants refused to turn back.

By Tuesday morning, the caravan had caught the attention of Trump, who tweeted about it.

"We have today informed the countries of Honduras, Guatemala and El Salvador that if they allow their citizens, or others, to journey through their borders and up to the United States, with the intention of entering our country illegally, all payments made to them will STOP (END)!"

He added, "Anybody entering the United States illegally will be arrested and detained, prior to being sent back to their country!"

Bartolo Fuentes, one of the coordinators of the caravan, told CNN on Monday the group planned to apply for humanitarian visas in Mexico that would allow them to travel through the country to the US border.

Many families in the caravan spent Monday night in Esquipulas and restarted their march north Tuesday morning.

Organizer arrested as governments speak out

Guatemalan authorities detained Fuentes and two others on Tuesday, the Guatemalan government source told CNN. All three are set to be returned to Honduras in the coming hours, the source said. The reasons for their detention remain unclear.

Fuentes, a former lawmaker from Honduras, told CNN Tuesday morning that police had been following him in Guatemala.

Guatemala's foreign ministry issued a statement saying its authorities would take necessary steps "to identify and document the people who entered Guatemalan territory in an irregular manner." In addition, the statement said, authorities have been instructed "to take necessary and appropriate measures to guarantee order and national security."

The Honduran foreign ministry also issued a statement Tuesday evening, decrying the march as a political move aimed at "altering the governability, stability and peace of our countries." Officials urged members of the caravan not to allow themselves to be used.

The caravan "was organized by political sectors with false promises," the statement said.

"The organizers are deceiving the people, making them believe that if they arrive in the United States, they will be welcomed."

Six months ago, another high-profile caravan headed to the border

That group's approach sparked a Twitter tirade by Trump, and days later spurred his decision to deploy National Guard troops to the US-Mexico border. Trump also threatened foreign aid to Honduras at that time.

Ultimately, hundreds of migrants from that group crossed the US border and asked for asylum.

Leaders of the new caravan told CNN en Español that it formed spontaneously and was organized through social networks.

This caravan's formation also comes just weeks before high-stakes midterm elections in the United States, in which many Republican candidates have been echoing the President's messaging about boosting border security and cracking down on illegal immigration. And no matter what happens next to these migrants, their caravan is likely to come up on the campaign trail.

"We are concerned that these migrants have been the victims of false promises by those seeking to exploit them," a State Department spokesperson said Tuesday.

US Department of Homeland Security spokeswoman Katie Waldman said the agency is monitoring the caravan and working with Central American countries and Mexico on the matter.

"As we have said time and again, until Congress acts, we will continue to have de facto open borders that guarantees future 'caravans' and record numbers of family units entering the country illegally," Waldman said.

Honduras, the second-poorest country in Central America, is plagued by widespread gang violence.

San Pedro Sula, where this caravan began, has been described as one of the world's murder capitals.

Honduras is set to receive more than $65 million in foreign aid from the United States in the 2019 fiscal year, according to a US government website tracking foreign assistance, which describes "alarming levels of crime and violence, high levels of poverty and food insecurity, and ineffective governance and corruption" in Honduras.

Experts have argued that US foreign aid has helped stem violence in the Central American country. And that without it, migration is likely to increase.