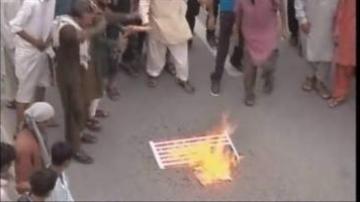 Anti-American fury is expanding across the Muslim world.

Demonstrators are still protesting the anti-Islam film that was produced in the U.S.

Violent protests are happening in Indonesia, Pakistan and Afghanistan. Hundreds of Afghans burned cars and threw rocks at the U.S. military base in their capitol Monday.

More than 20 police officers were hurt in the protests.

In neighboring Pakistan, violence continues as around 3,000 students and teachers rally.

One police officer is dead after demonstrators set a press club and government office on fire and protesters in Indonesia, the world's largest Muslim-majority country, burned a picture of President Barack Obama and were hurling Molotov cocktails and starting fires.

The movie at the center of the controversy is offensive to the Islam religion and portrays Muhammad as a womanizer, child molester, and a fraud.

Tuesday marks one week since the protests started.