Archaeologists uncover remains of man crushed as he fled Pompeii 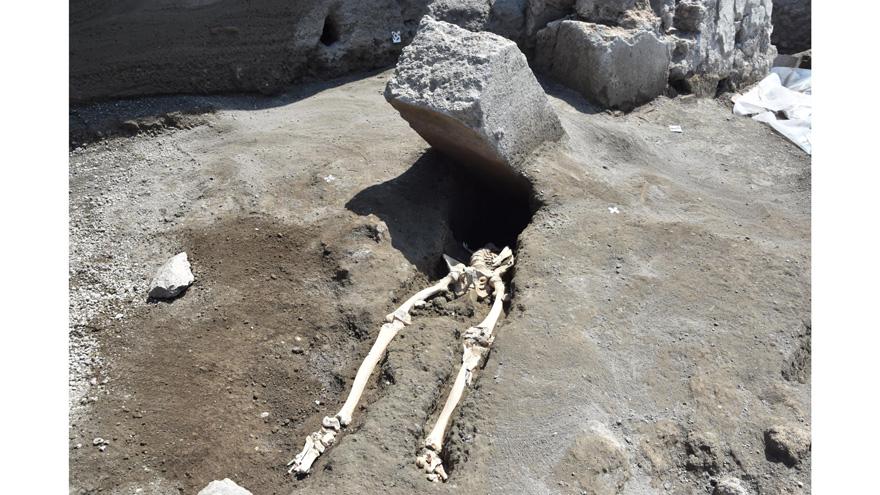 (CNN) -- A man managed to escape the first eruptive fury of Vesuvius in A.D. 79, only to be crushed beneath a block of stone hurled by an explosive volcanic cloud, new excavations at the site suggest.

Archeologists working at the ancient Roman city of Pompeii, Italy, found the man's remains almost 2,000 years after he died.

Stunning pictures from the scene show a skeleton pinned beneath the stone. The impact crushed the top of the man's body. His head might still be buried beneath the block of stone.

Lesions on the skeleton's tibia are signs of a bone infection that probably hampered the man's escape attempt, archeologists said.

Nonetheless, the man, who was at least 30 years old, survived the first phase of the eruption and fled along an alley, probably limping because of his infection.

But there he was hit by the massive stone block -- perhaps a doorjamb -- possibly hurled at him by the force of the pyroclastic flow. That's the blazing-hot mixture of gas, lava fragments and other debris belched out by a volcano.

"This discovery has shown the leaps in the archeological field. The team on site are not just archeologists but experts in many fields; engineers, restorers and (have) the technical tools like drones and 3D scanners.

"Now we have the possibility to rebuild the space as it once was," said Massimo Osanna, general director of the Archeological Park of Pompeii.

"This is the first time an excavation happens with all of these tools. In the 1800s and 1900s, they dug in the area where we found the skeleton, but they did not go as deep as we did. Because of the experts we had, we knew how to do it."