Arrest made in weekend murder, victim's family speaks out 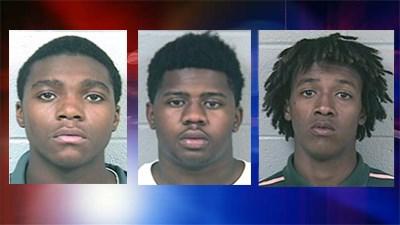 One person has been arrested and charged with murder in the death of Karlos Kelly, 17, who was killed Sunday afternoon at the Blossom Acres Housing Complex, according to Benton Charter Township Police.

18-year-old Seddrick Williams is in custody charged with murder and felony firearm. 18-year-old Anthony Walker is the suspected shooter and he is wanted for murder. 18-year old Daquantaries Williams is wanted for questioning and witnesses told police they were all in the same vehicle when shots were fired in the 1200 block of Blossom Lane.

Witnesses told police Kelly walked in the direction of the car and Walker got out of the vehicle and shot Kelly. The car left the scene.

The family of the slain 17-year-old is speaking only to ABC57 about the deadly shooting.

15-year-old Jakarla Kelly was in tears over the death of her only brother.

Jakarla Kelly said, “Yall took a piece of me. That’s my only brother I got. I got nobody else, they took him away from me. Wake me up in the morning and tell me it’s ok…”

Kalasandra and Jakarla's last memory of Karlos—a Facebook video someone posted of their brother’s lifeless body in the street.

Kalasandra Kelly said, “I got on Facebook and saw a video of my brother laying there dead, bloody, his face everything, blood everywhere. Why would they put that on Facebook?”

Witnesses told the sisters that their brother was playing basketball at the apartment complex when there was a disagreement over money so he left.

Moments later witnesses told the sisters there was a drive by shooting. They believe their brother was targeted and he was reportedly seen pushing a little girl out of the way of the gunfire.

Kelly said, “He pushed the little girl and told her to run and they shot him and pulled off like it wasn’t nothing. Who would just kill somebody so innocent, he didn’t do nothing.”

On Monday children barely old enough to understand the gravity of this life and death situation, lit candles and placed roses in the street.

Kelly said, "This is the hardest thing I’ve ever been through, like that’s my only brother. Can’t nobody bring that back.”

The Kelly sisters are worried that justice will not be served. The shooter is still at large, and witnesses are scared that if they talk, they will be killed too.

Kelly said, “She scared to testify on them the person that did it because she didn’t want to get killed. She doesn’t want to lose her life and she’s scared.”

On Monday a vigil was held at the apartment complex to help the Kelly sisters pay for funeral costs.

Police were called to the apartment complex around 3 p.m. Sunday. When they arrived they found Karlos Kelly lying in the road. CPR was attempted, but Kelly died at the scene.

Police say they have received numerous accounts about what led up to the shooting.

Police do not believe the incident is gang related.

If you have any information, contact the Benton Charter Township Police Department Detective Bureau and/or Crime Stoppers at 1 800-342-7867.