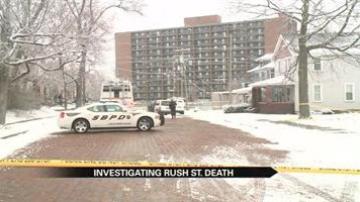 SOUTH BEND, Ind. -- An arrest warrant has been issued related to the death of 27-year-old Matthew Mitchell.

St. Joseph County Police were called to a home in the 500 block of Rush Street in South Bend around 3 a.m. Friday morning.

At the home, police found 27-year-old Matthew Mitchell deceased in the front section of a two apartment residence.

When St. Joseph County Police arrived, several people were there and some were hysterical.

St. Joseph County Police initially were unable to gather evidence because they needed a search warrant and there were three pitbulls inside.

After obtaining the warrant and after the dogs were removed by animal control, officers began gathering evidence.

Nearby residents are worried about the increasing violence in their neighborhood.

"There's a lot going on in South Bend. That isn't what we'd like to raise our children around," said resident Karen Coleman.

Initially police could not tell whether Mitchell died as a result of a gunshot wound or a stabbing.

The autopsy determined he was stabbed and that his manner of death was homicide.

According to witnesses, Mitchell and McNeill were in a physical confrontation and both men struck each other repeatedly until McNeill pulled out a knife and stabbed Mitchell, according to the probable cause affidavit.

A warrant has been issued for McNeill's arrest.