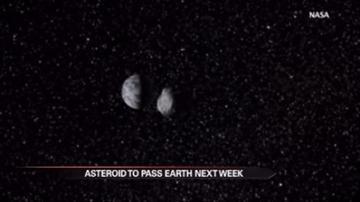 Star gazers and scientists are keeping a close eye on the skies. Next week, an asteroid is expected to pass Earth.

It's about half the size of a football field and is expected to travel within 17,000 miles of Earth. That's closer than most GPS or TV satellites.

NASA said there is no reason to panic.

"The close approach of the object 2012 DA14 on February 15th is nothing to worry about," said Don Yeomans, a manager at NASA's Near Earth Objects Office. "Its orbit is very well known. We know exactly where it's going to go, and it cannot hit the earth."

NASA scientists said there is little chance the asteroid could hit the earth or any of the satellites.