Back to reality: Obamas settle into DC life 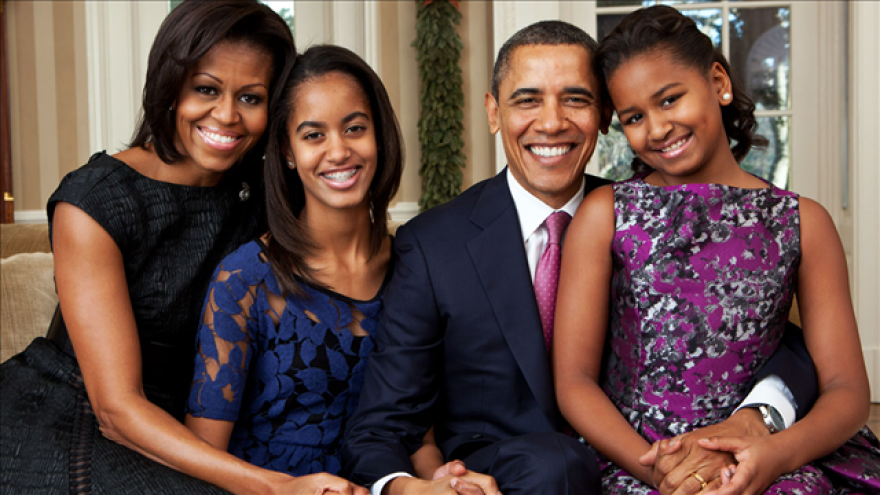 WASHINGTON (CNN) -- Vacation's over. After a two-week escape to Palm Springs and the British Virgin Islands, Barack and Michelle Obama are back in Washington, where they will begin to settle into the post-White House life.

While most former presidents depart Washington when they take their final flight aboard Air Force One, the Obamas are opting to stay in the District as daughter Sasha, 15, finishes up at Sidwell Friends School.

They're renting an 8,200-square-foot brick Tudor home in DC's posh Kalorama neighborhood, where neighbors include a former congressman, the French ambassador and Ivanka Trump and Jared Kushner. Built in 1928, the home has nine bedrooms, a generous living room and dining room, a finished downstairs family room/media room, and an au-pair suite. Movers were spotted unloading boxes of the first family's belongings into the new home just before Inauguration Day.

The former President is expected to write a book and begin work on the Obama Foundation, working from office space inside the headquarters of the World Wildlife Fund. But he and the former first lady will suddenly have a lot more free time on their hands.

Where will Washingtonians catch a glimpse of DC's most high-profile private citizens? Some ideas:

Michelle Obama was spotted brunching at Open City in 2014, a spot serving breakfast all day and coffee with a side of animal crackers.

One top priority for the former first lady in her new life? Errands.

"I want to go to Target!" she proclaimed to Stephen Colbert in 2015.

The former first lady, who called herself "more of a Target shopper" in 2008, was spotted shopping at a suburban Target in 2011. DC's Columbia Heights location is less than two miles from her new abode, but there are multiple options in Northern Virginia for her retail desires.

Looking for a fun family activity? The first family participated in an "escape room" challenge while on vacation in Hawaii. If they're looking to replicate that experience, The Great Escape Room DC is in nearby Dupont Circle.

And don't forget the former first pets: They don't have a South Lawn to roam around anymore. Will Bo and Sunny go to Mitchell Park, just a 12-minute stroll from their new home?

The Obamas are big fans of DC chef José Andrés and his restaurants. The former President awarded Andrés the 2015 National Humanities Medal during a high-profile legal battle with then-candidate Donald Trump over pulling his restaurant out of the Trump International Hotel DC. Andrés was spotted arriving at the White House in January for the couple's last big bash while in office.

Obama loves the guacamole at Oyamel Cocina Mexicana, and Mrs. Obama has dined at his Mediterranean spot, Zaytinya, where she reportedly enjoys brussel sprouts and dirty martinis. They celebrated Valentine's Day at Minibar in 2013.

Maybe they'll drop by Beefsteak, his fast casual vegetarian spot one mile from their home, for some takeout.

Want Michelle Obama arms? You better work. The former first lady is said to be a fan of [solidcore], a full-body toning workout using a custom-designed tension machine called "Sweatlana." There are five locations in DC.

She also has been known to get her cardio fix at SoulCycle's four locations, and was often spotted by star-struck Washingtonians coming and going from class. She has also reportedly arranged her own private sessions outside normal class hours.

Obama played over 300 rounds of golf as president, and there's no doubt he'll keep up his hobby. It's unclear whether he will join a club, but the Woodmont Country Club in Rockville, Maryland, where he played multiple times, has extended the Obamas an invitation.

"Barack Obama can play golf anywhere he wants to play," a source with knowledge told CNN, adding that he's not in a rush to formally lock down a membership. "I don't think he's spent any time on this."

In the meantime, he may also be seen at other courses he's golfed before in the area: the course at Andrews Air Force Base, Fort Belvoir's course in Virginia, and TPC Potomac Golf Club and Columbia Country Club in Maryland.

While in office, the Obamas participated in numerous service projects, and it's likely their community involvement will continue. The first couple stopped by a local elementary school to plant a garden and deliver books on one of their final days in office. They have handed out groceries at Martha's Table, a local food pantry. Michelle Obama once joined second lady Jill Biden and congressional spouses at the Capitol Area Food Bank. And they've served Thanksgiving dinner every year, including to veterans at the Armed Forces Retirement Home and to the homeless at DC's Friendship Place.