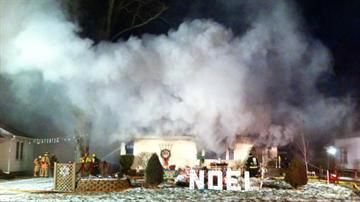 BARODA, MI -- A Michigan couple is lucky to be alive after their house caught on fire early Saturday morning. The fire happened shortly before six in Baroda, just west of Berrien Springs. The homeowners got out in time, but lost more than a dozen animals in the process.

Bruce Grilich's dogs are usually quiet, so when he heard them barking early Saturday morning, he knew something was wrong.

"We woke up, went down to the basement, saw the smoke starting to roll out, and the flames started coming out of the ceiling," Grilich said. "I said to my wife Sandy, 'We gotta get outta here!'"

The fire was so intense, firefighters had to cut their way in with chainsaws.

Upon entering, the floor started to sink, and the ceiling caved in.

"Once we went down to the basement, we had to back out, because the heat was too much," Klug said. "We couldn't keep the guys down there for safety (reasons)."

Grilich and his wife tried to save anything they could on their way out, but their 12 cats and two dogs just didn't make it.

Left with only the clothes on his back, he's hoping his home insurance kicks in.

Meanwhile, crews are trying to figure out a cause and offer some suggestions so this doesn't happen to you.

"Make sure your smoke detectors are working. Don't overload your electrical outlets and stuff like that," Klug said. "This may turn out to be an electrical fire; could've been going for days before he knew it."