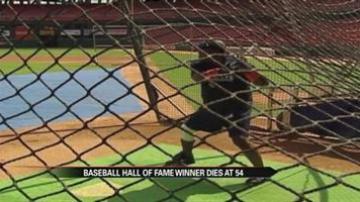 The 54-year-old died after a long battle with mouth cancer.

He claimed it was brought on by smokeless tobacco.

Gwynn played for the San Diego Padres and was inducted into the Baseball Hall of Fame in 2007.

He also and played in the All-Star game 15 times over his 20 year career.
Share this article: