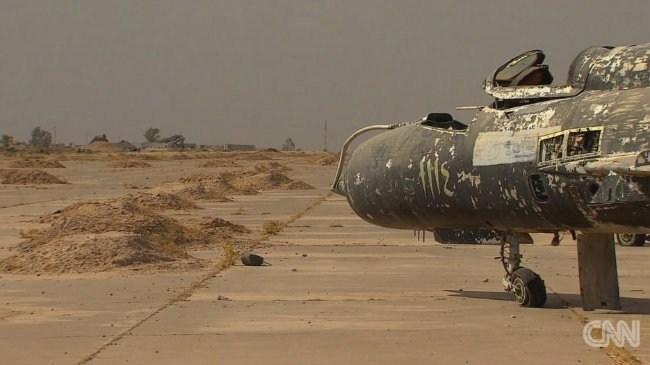 AL-QAYYARA, Iraq (CNN) -- The Iraqi Army Humvees barreled across the Nineveh province moonscape toward the town of al-Qayyara, the next front line in the military quest to dislodge ISIS from the sprawling city of Mosul.

ISIS tries to decrease the advancing soldiers' visibility by burning up oil tankers and flooding the air with smoke. But the troops pushed forward despite black apocalyptic skies, street after street of decimated buildings, torn electric cables whipping across the road, and hot searing winds.

Now they're just a couple of kilometers away from the town center and about 60 kilometers from Mosul. By the end of the year, they say, they will liberate Iraq's second-largest metropolitan area seized by ISIS two years ago.

Since we were last here in April, the Iraqi Army made significant advances in their fight to regain Mosul and the choke-hold around the city is tightening.

Over the last four months, soldiers have methodically toughed it out as they pressed north through villages and towns. At one point, they reached the Tigris River and then dropped a pontoon bridge that ISIS tried but failed to blow up with a boat packed with explosives.

In July, soldiers seized Qayyara airbase, Iraq's third largest -- a major stride. The site -- not far from the town of al-Qayyara -- is to be a vital staging ground for Iraqi and U.S. troops eying Mosul once it is cleared of explosives and the runways are cleaned

'A lack of foreign fighters'?

Gen. Najim al-Jobouri, the commander of Iraq's Nineveh operations, said soldiers now sense a weakening ISIS. Before, he said, most of the ISIS attackers were foreign fighters. Now, they are a mix of foreigners and locals.

"I think that they have a lack of foreign fighters," he said.

But there is uncertainty too. Al-Jobouri also wondered whether ISIS will unleash more foreign fighters when the anticipated "Battle of Mosul" ensues.

He chatted while standing in the small lawn of a home where a collection of weapons is on display, made in Iraq and Syria for ISIS.

One was a homemade mortar tube taller than most of the soldiers. Another was a mortar larger than similar munitions at Iraq's disposal.

The plea: 'We are thirsty'

Not far away, people who've fled ISIS have fled to a makeshift camp for displaced people -- tents set up in the middle of barren land.

Hot desert winds blast across the field. The heat is thick and suffocating. The sand sticks to everything, turning the children's matted hair shades lighter.

People swarm us the moment we arrive.

An elderly woman holds a picture of her son killed by ISIS as she clutches her granddaughter's arm.

We are hustled from tent to tent to see babies, listless and dehydrated. Children don't remember the last time they showered. And everyone repeats, "we are thirsty."

There is no clean water out here, only water drawn from a well making everyone sick. There are two toilets for a population of over 1,000. The diet? Beans and lentils twice a day.

Help has not been on the way, despite promises from international organizations and the Iraqi government. The location is just too close to the front line and the logistics of pre-positioning shelter and aid is exacerbating the misery.

Aid organizations warn of the "humanitarian catastrophe of the century" with more than 1 million people potentially fleeing Mosul and taking flight through its corridors.

It's a catastrophe because it's an anticipated and predictable disaster in the making. There's no justification for not fulfilling the urgent responsibility to ensure shelter, medicine, food, water to those who have already endured too much.

Other nearby camps in safe zones are overcrowded, and the offensive into the city of Mosul has yet to begin.

In Iraqi Kurdistan, the Debaga camp has grown to five times the size it was back in April.

More extensions are being built, but they are barely enough to cover the current backlog. Families cram under tarps and makeshift shelters or pack a school waiting for their accommodations.

"They have fled conflict, fled violence, they come here traumatized often thirsty and severely exhausted and we are not able to provide them with the services they need because we don't have the land," said Elisabeth Koek, advocacy and information adviser at the Norwegian Refugee Council.

Once land is allocated, which needs to be done by Iraq's Kurdish Regional Government, there still is the issue of funding.

Around $284 million was allocated during a flash appeal last month. But money needs to be released immediately, not just when a mass displacement happens and the crisis reaches unmanageable levels.

The need is already painfully evident. All along the various front lines as forces move forward, residents flood out from whichever point they can find.

To the north and east of Mosul the Kurdish Peshmerga have advanced, capturing several villages to the southeast of the city.

Huddled in the shade at a Peshmerga checkpoint is a small group that just fled.

Three women are sisters-in-law, seated quietly still in the black niqabs ISIS forces women to wear, their children clustered around them. Their husbands left two years ago looking for work and were not able to make it back home.

Two of the women have children who have not yet met their fathers and they hope to be reunited soon.

They all hide their faces, scared for the loved ones still under ISIS control and disclose few details of their escape.

One man, a relative, saw an opportunity for the group to flee when the Peshmerga moved closer to his lands.

"I am so happy for them," the man said. "But I am heartbroken myself. My parents were not able to come with me. I don't know how I am going to get them out."