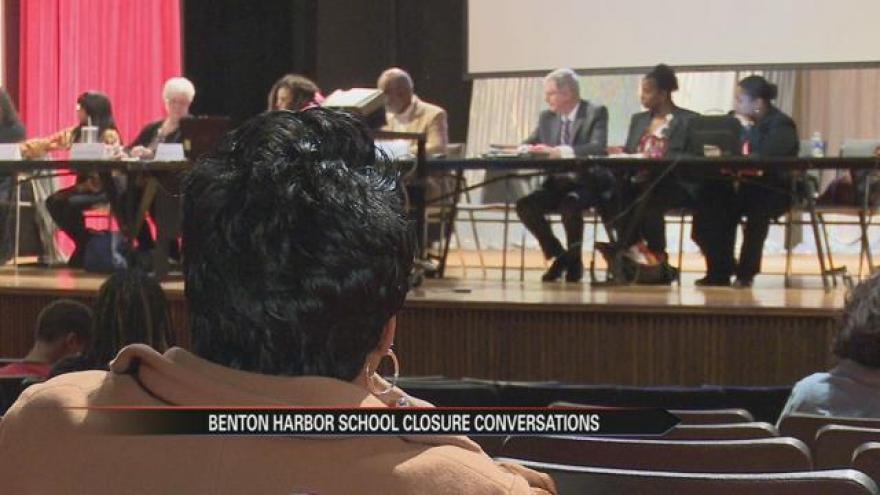 The first of a few conversations between Benton Harbor Area Schools and the community happened Wednesday night following the news three underperforming schools could be shut down.

A few dozen members of the community showed up to a special board meeting at the high school to voice their concerns.

Some parents told the board tonight they were scared as the prospects of another wave of school closings could cripple this district.

But instead of just venting, most that showed up also expressed hope and committed to working with the board to solve this problem.

“Every parent deserves to get out of their fears and look at what has happened,” said parent Lisa Gorman. “We still have some bumps in the road, but hey, we’ve done some great things too.”

The panic started last Friday then the state’s reform office (SRO) sent a letter to parents of the district stating three out of six schools here were consistently underperforming.

The International Academy at Hull, Dream Academy and MLK S.T.E.A.M. are being reviewed by the SRO because they’ve ranked in the lowest 5-percent of Michigan schools for at least three years in a row.

Superintendent Walker said she couldn’t foresee the district surviving after taking another massive cut in schools.

Wednesday she told parents, alumni and staff, failure is no longer an option.

“This is going to make us a better district, this is an opportunity, this is a platform to spring forward,” said Walker.

She says she’s working to turn around these schools and keep the state out of the district’s business.

Walker says the plan is to show the SRO the strides this administration has made thus far.

She calls it the district’s Points of Pride.

Walker will hold another town hall for concerned parents.

Benton Harbor Mayor Marcus Muhammad will also be holding a town hall to address concerns about the schools at city hall on Thursday at 6 p.m.