Benton Harbor officials will host a series of public forums 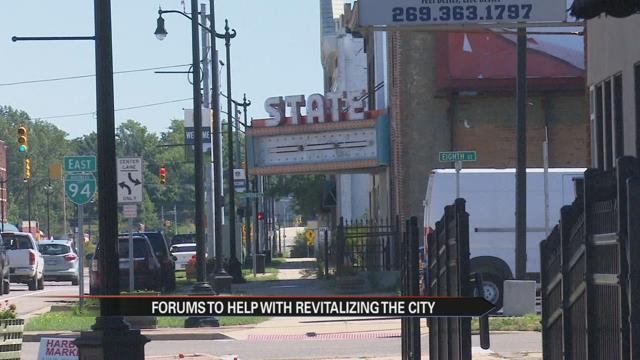 Benton Harbor officials are seeking change. They want to revitalize the city, but are asking the community’s residents and business owners to weigh in.

The city’s Downtown Development Authority will be hosting a series of forums this month to receive public input about what they want to see developed in Benton harbor. They want ideas and suggestions from community business and property owners and downtown neighborhood residents.

The forums will cover all ideas from the use of physical space to the marketing and vision for downtown Benton Harbor.

“To function well, I think a city has to really draw on its diversity of opinions and the different energies that people bring,” said Richard Hensel, the President of Benton Harbor’s Downtown Development Authority.

“We have a really great group of people who are very passionate about what they do and they bring that into the meetings,” Hensel said.

It’s been five years since forums have been held.

“Those plans have kind of been out there to kind of follow and make use of, but part of what we’re going to talk about is have they actually been implemented or where are we in the process,” Hensel said.

The first forum will be held on September 13th for business owners and developers at the Benton Harbor Public Library from 6:00 pm-7:30 pm. For future dates and more details on the forums, visit the DDA’s Facebook page: https://www.facebook.com/Benton-Harbor-DDA-676268182473041/