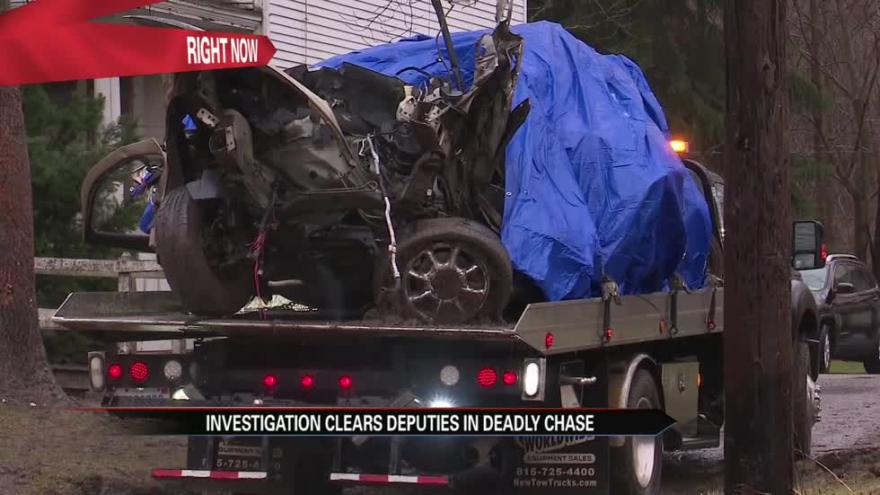 BERRIEN COUNTY, Mich. -- Berrien County deputies will not face any charges for a fatal pursuit involving a vehicle with four suspects in the theft of firearms from the Black Arsenal Gun Shop, according to Berrien County Prosecutor Mike Sepic. Three of the four suspects died when their vehicle crashed into a tree.

Officers were dispatched to a break-in at the Black Arsenal Gun Shop in Stevensville just after 5 a.m. on Sunday, April 15.

The suspect vehicle was described as a tan 4-door SUV.

A Berrien County Sheriff's Deputy spotted a vehicle with a similar description headed eastbound on I-94 and attempted to conduct a traffic stop on the vehicle near the M139 exit ramp.

Just after the SUV and the deputy stopped, the SUV drove away and took the M139 exit and headed southbound on M139, according to the prosecutor's office.

At Miner's Road, the lead deputy slowed because the traffic signal was red for southbound traffic, but the suspect vehicle drove through the intersection, reports said.

The deputy involved in the chase reported the vehicle was driving up to 100 miles per hour.

Investigators say the deputy kept a distance from the suspect vehicle, but had the vehicle in view during the pursuit.

After passing a northbound semi, the suspect vehicle swerved, left the road and crashed into a tree at approximately 5:30 a.m. The crash happened on M139 near Rocky Weed Road in Royalton Township.

At the scene of the crash, deputies found nine firearms reported missing from the gun shot.

Berrien County Prosecutor Mike Sepic says because the deputies maintained sight of the suspect vehicle, which was appropriate, there was no violation of criminal law by the deputies who conducted the chase.