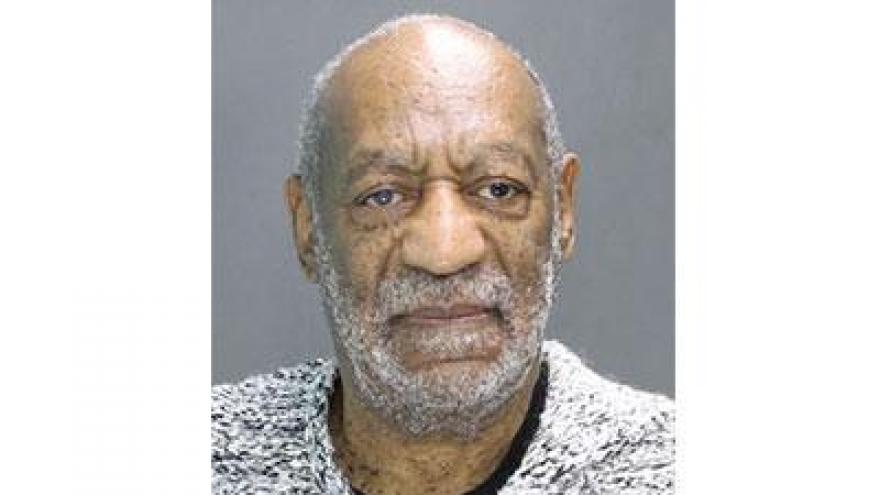 By Mariano Castillo and Jason Hanna

(CNN) -- Bill Cosby has been charged with sexual assault in relation to a 2004 accusation in Montgomery County, Pennsylvania.

Cosby, whose legacy as a comedian has been tarnished by multiple accusations of sexual assault, faces three felony charges of aggravated indecent assault in the case.

He was arraigned Wednesday afternoon, where the judge set his bail at $1 million. Cosby was looking down and was guided as he walked into the small courtroom.

Among the conditions for bail, the judge ordered Cosby to surrender his passport. Cosby's attorney had the passport in hand and handed it over to the prosecutor.

Cosby did not enter a plea.

These are the first criminal charges levied against Cosby since the allegations first arose. Cosby has steadfastly denied any wrongdoing.

After looking at all the evidence in the 2004 allegations, prosecutors decided to charge Cosby "because it was the right thing to do," Montgomery County prosecutor Kevin Steele said.

CNN has reached out to Cosby's lawyers for comment.

The district attorney did not name the victim, but the accusations he announced parallel the allegations made by former Temple University employee Andrea Constand. She has said Cosby drugged and fondled her in January 2004.

She was the first person to publicly allege sexual assault by Cosby. Prosecutors declined to file charges at that time, citing insufficient evidence.

The criminal investigation into Cosby in Montgomery County was reopened in July after new evidence came to light, Steele said.

The evidence was court documents related to a civil suit that Constand filed against Cosby after prosecutors declined to seek charges against the comedian.

Constand settled the civil case against Cosby in 2006.

This past July -- nine years after the civil case was settled -- a judge decided to unseal Cosby's deposition in that case in response to a motion by the media.

In it, Cosby admits he had sexual relationships with at least five women outside his marriage, gave prescription sedatives to women he wanted to have sex with and tried to hide affairs from his wife.

Prosecutors reexamined the original investigation in light of the new documents, reinterviewed some witnesses and decided to pursue the criminal charge.

"The evidence shows Mr. Cosby established a relationship with the victim after meeting her through her work associated with Temple University's women's basketball program," Steele said.

Constand considered Cosby a friend and mentor, but on two occasions rejected advances by Cosby, he said.

"On the evening in question, Mr. Cosby urged her to take pills that he provided to her, and to drink wine, the effect of which rendered her unable to move or respond to his advances, and he committed aggravated indecent assault upon her," Steele said.

Pennsylvania law has a 12-year statute of limitations for sexual assault cases, a window that closes early next year.

Some unsealed documents from the civil suit revealed that Cosby has admitted to getting prescription Quaaludes to give to women he wanted to have sex with.

Asked whether investigators believe Cosby used Quaaludes in the 2004 case for which he is being charged, Steele said that pills were provided.

"There's inconsistencies on [what pills they were]. There was also wine provided," the prosecutor said. He said the woman has said she was "frozen, paralyzed, unable to move," so she was therefore unable to consent to sexual activity.

The 78-year-old Cosby has been dogged by allegations of sexual assault. At least 50 women have come forward to publicly accuse him of assaulting them over four decades, most saying he drugged them first.

Formal accusations date back at least 10 years, when Constand went to police with her complaint.

Cosby's reputation as a comic, beloved TV dad, philanthropist and education advocate appeared unaffected by the allegations before public sentiment took a turn in late 2014.

Comedian Hannibal Buress has been credited as the one who spotlighted the accusations. In October 2014, a video of a standup routine in which he called Cosby a "rapist" went viral, and soon after, women started coming forward with claims that they were drugged and assaulted by the TV legend.

In interviews, Buress said his intention to not to "out" Cosby, but to make a joke about Cosby's alleged hypocrisy. Cosby created a moral image for himself as a crusader for high moral standards, Buress said in his routine, while facing accusations of rape.

Cosby filed a countersuit this month against seven women who had accused him of sexual assault and sued him for defamation. Cosby said the women's accusations hurt his reputation so much that plans for a new family comedy on NBC were derailed.

On December 15, Cosby sued Beverly Johnson, a pioneering African-American supermodel who accused Cosby in 2014 of sexual misconduct that she says happened years ago; Johnson says the comedian drugged and tried to rape her at her New York home in the mid-1980s.

Cosby's lawsuit says Johnson joined other women making accusations against him to revive her waning career and to help sell copies of her memoir.

The lawsuit alleges defamation and intentional infliction of emotional distress, saying Cosby and Johnson never spent any time alone in his house, he never drugged her and "her story is a lie."

"I am aware of the statements from Bill Cosby," Johnson said in a statement. "In cases of rape and abuse, abusers will do whatever they can to intimidate and weaken their victims to force them to stop fighting. I ask for your support of all of the victims involved."

Attorney Gloria Allred, who said she represents 29 Cosby accusers (but not Constand), hailed the charges.

"I for one am very happy with this," she told CNN. "I think the prosecutor in Pennsylvania looked at this very carefully. I don't think this is political."

Allred said some of her clients may be called as witnesses in the criminal case. She said she may be able to depose Cosby again because of the criminal charges.

Tom Mesereau, who defended Michael Jackson against child molestation charges, told CNN the deposition (the "new" evidence) in the Constand case may not hurt Cosby.

Mesereau said the details of the Constand deposition, viewed in context, don't prove Cosby sexually assaulted anybody. Cosby denied giving pills to or having sex with anybody who didn't consent, he said.

"You can't just take snippets out of an interview and say this will get him convicted," he said.