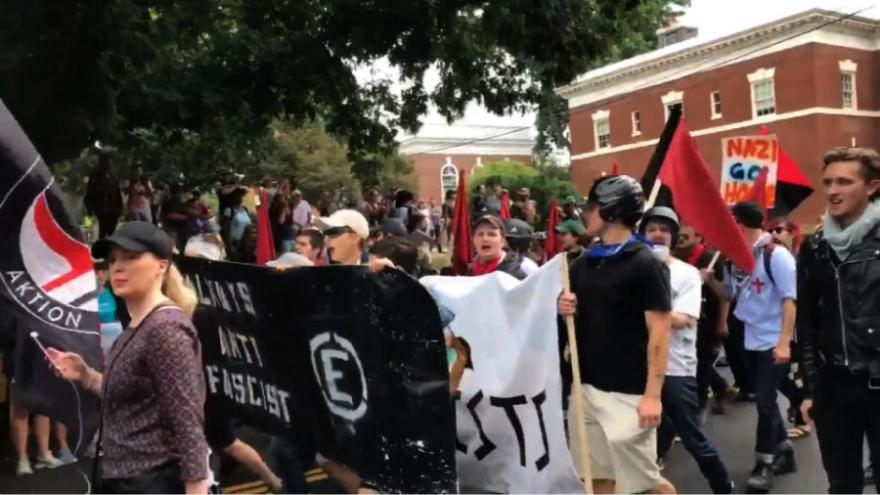 (CNN) -- Some white nationalists and right-wing protesters who have converged on Charlottesville, Virginia, have been using a Nazi rallying cry.

Video shows some of the protesters shouting "blood and soil," a phrase invoking the Nazi philosophy of "Blut und Boden." The ideology stressed that ethnic identity is based on only blood descent and the territory in which an individual lives -- and it celebrated rural farmers and peasants as virtuous Germans.

The group gathered to protest Charlottesville's plan to remove relics of its Confederate past, such as a statue of Confederate Gen. Robert E. Lee.

The "blood and soil" chants began Friday night when torch-bearing protesters marched at the University of Virginia and clashed with counterprotesters. More white nationalist protesters continued the cries during Saturday's gatherings.

The phrase dates to the earliest days of Nazi propaganda.

Richard Walther Darré, who served as the Nazis' minister of agriculture between 1933 and 1942, championed the "blood and soil" ideology. It glorified the role of rural peasants in German society: Those with a long family history in Germany (blood) and who tended to the land (soil) played a key role in supporting the state.

"In such a state (as Germany) the German farmer is the cornerstone of the state's policy," Darré said in a 1930 speech. "That should not only mean that agricultural romanticism should be promoted, but rather that the laws of blood and soil must find their point of reference as a top priority."

Many rural farmers identified with the Nazis' blood and soil rhetoric, and it instilled a deep sense of national pride in poorer and agricultural populations.

Some Nazi propaganda also insisted that most Jewish people were merchants -- stereotyping the population as distinctly opposite from the "blood and soil" German farmers.

"There are no Jewish construction workers in Germany, no smiths, no Jewish miners or seamen. Nearly all major inventions were made by Aryans," a 1934 pamphlet for young Germans claimed. That piece of propaganda goes on to claim that Jewish merchants took land away from German farmers, forcing them into "poverty and misery."

Today, the Anti-Defamation League lists both "blood and soil" and "Blut und Boden" as hate slogans.