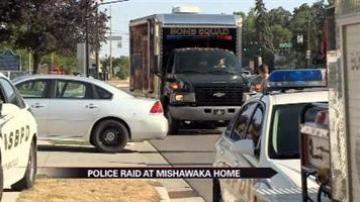 The Metro Special Operations Section [SOS] received a tip that drugs were being sold out of the home. When investigators for the narcotics unit came to the home they stumbled upon not only drugs, but explosives used to make fireworks.

For neighbors watching, it was quite the scene. Several police officers and the bomb squad surrounded the Mishawaka home and, initially, it had many neighbors concerned it was not safe to stay inside their homes.

Tracey Howard lives just across street and she said, at first, she considered grabbing her daughter and leaving. "We thought about it, but I figured that if it was that bad then they would have come over and told us we need to leave," said Howard.

After hours of waiting, the bomb squad moved in after investigators secured a search warrant. Investigators carried dozens of boxes from the detached garage just behind the home. Some of the boxes were nothing more than store bought fireworks, but there were others that were full of homemade fireworks and explosive materials.

"I'm just glad that they found the drugs and removed those," said Howard. Investigators said they visited the home after receiving a drug complaint that someone was selling illegal drugs out of the house.

Officers found what they believe to be marijuana that is when they arrested Lowell Kortas, who lives in the home with his cousin. Although many keep to themselves, neighbors said they were very surprise to learn this was happening so close to home.

"This has been a quite neighborhood and we've not had any issues. The fire department is right there and with them right there we really didn't think there would be any issues," said Howard.

Kortas has not been formally charged.