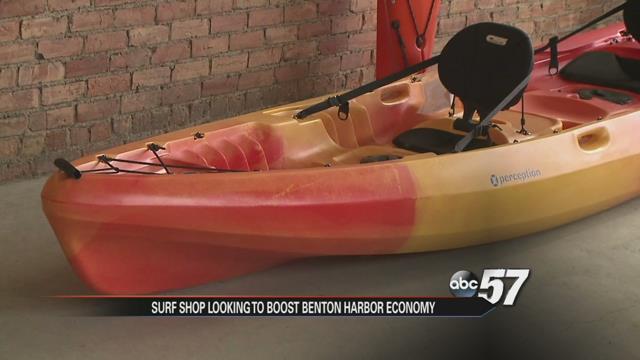 The city of Benton Harbor has been trying to revitalize downtown for years. Now they are starting to see some growth, and a new unconventional business called Third Coast Surf Shop may be a sign of that.

It is something different. Often times, that's all you need to make a downtown area thrive and develop its own culture. And it doesn't get any more different in cold and snowy Michigan than a surf and kayak store.

"It seems strange, yeah Benton Harbor, a place for a kayak and paddle board store," said owner Ryan Gerard.  "That's not the case for us. It seemed like a natural fit for our business. We're looking to actually grow."

Third Coast Surf Shop already has locations in New Buffalo and St. Joseph. Now they are catching on to a rising tide; a stronger interest for aquatic recreation on Lake Michigan, and a changing landscape in downtown Benton Harbor.

"We've really seen an increase in the interest in the paddling side of our business. Specifically in the kayak rentals, standing paddle board rentals," said Gerard.

They say they love paddling along with the upstart city, and hope they can be a lifesaver for the downtown's comeback.

This new Third Coast Surf Shop location was announced weeks ago, but Gerard says they are already seeing a lot of buzz here in the city. They are set to open in early April.