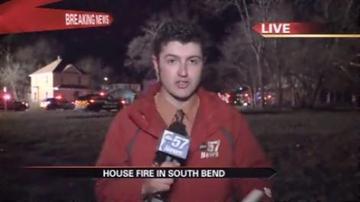 SOUTH BEND — ABC 57's Daryl Bjoraas is on the scene of an active house fire on the corner of Scott Street and Wayne Street in South Bend where over a dozen firetrucks are trying to put out the fire. The man who owns the home has been taken to South Bend Memorial Hospital.

The fire broke out just after 9 p.m. Friday.

An elderly man owns the house. After running to his neighbor's house to ask them to call 911, he returned to his house while the fire was still burning. He was then taken to the hospital by paramedics.

Firefighters have been trying to put the fire out, but the fire keeps returning and is proving difficult to put out.

It is unclear where or how the fire originated.

ABC 57 News will be live at the scene with more updates tonight at 11.