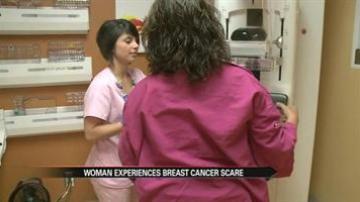 NILES, Mich. -- Finding breast cancer early is key to increasing your chances of survival. One local woman found a lump in her breast during a routine self-exam right after she turned 40. Doctors say that's when women need to start having yearly mammograms.

Kara Boyles, 41, says it was a normal day when she found a pea sized lump in her breast.

"I just happened to be doing a self breast exam, I was in the shower and I found a very small lump," said Boyles.

"I did have a mammogram. It was my first mammogram. It turned out that it was a lump and I had to go back and do a little further testing," said Boyles.

She was almost ready for surgery, but then - the unexpected happened.

"Based on a second opinion, one of the doctors determined it was actually just a lymph node," said Boyles.

She says it was a terrifying experience.

"I had a scary, rough, little patch there where there was a potential for something more than that but I was fortunate where it was just a lymph node," said Boyle.

She hid the scare from her family.

"They don't even know this happened. I never even told them," said Boyle.

Boyle said she wanted to stay strong for her kids.

"I didn't get scared on the outside because I am a mom and I think immediately my instincts kicked in," said Boyle.

She says this experience taught her not to take time for granted.

"It was really scary, but I think that maybe it is being 40-there's so many things happening in our lives that really you have to take each day as it is. Trust that the plan that's there for you-that's your plan. So just take each day," said Boyle.

Deb Leonakis is the director of the Breast Care Center with Memorial Hospital. She says breast cancer is common for women in their 40s.

"The important thing for women to realize is that 40 is the age for women to come in and get your mammogram," said Leonakis.

She says there are steps you can take to help catch it early.

"I think one of the most important things you need to do is understand your history and to know how your breasts feel," said Leonakis.

She says getting your yearly mammogram beginning at age 40 is imperative.

"You have a 95-percent chance of survival when we find breast cancer early," said Leonakis.