Brees throws his way into the record books 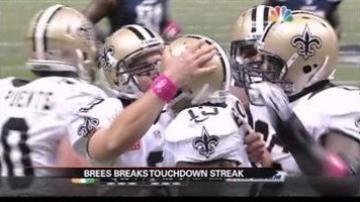 NEW ORLEANS -- It was a record held by legendary quarterback Johnny Unitas for 52 years.

And on Sunday, New Orleans quarterback and former Purdue standout Drew Brees set an NFL record with 48 consecutive games with a touchdown pass.

The record came with with a 40-yard pass during the first quarter.

"The guy who held this record for 52 years, Johnny Unitas, arguably one of the greatest quarterbacks to ever play this game, really revolutionized this position," Brees said. "It's a tremendous honor. It's humbling."