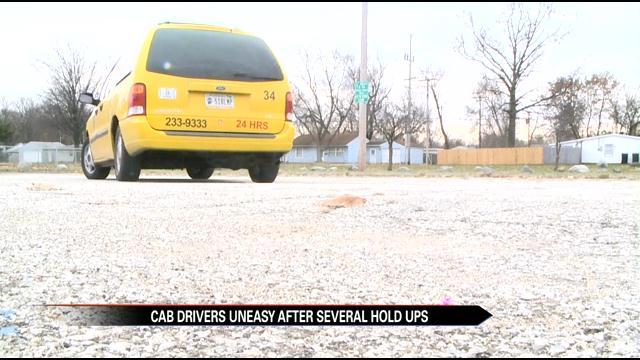 A string of holdups against cab drivers are putting those drivers on edge.

Drivers are saying that they are feeling uneasy, and these incidents are not just happening in one concentrated area.

They are happening in everyday neighborhoods and the drivers never know what they are pulling up to.

Carl Hartsock is a senior cab driver for Yellow Cab, he described what happened to one of his drivers just days ago.

He says things are getting out of hand.

Mishawaka police reports lay out more of what happened.

On November 28th, a Yellow Cab driver received a call from a man needing a lift from the 600th block of Middleboro Avenue in Mishawaka.

The driver pulled up and told the customer to get into the back seat, but instead the guy walked to the cab driver's door, pointed a gun at him and demanded his money.

The suspect then ran off.

Hartsock says "It's just been an ongoing thing with the robberies."

The latest happened November 30th in South Bend where a suspect walked up to a cab driver and demanded cash.

Cab drivers do have a light on the top of their vehicle they can turn on alerting others that they're dealing with a scary situation.

Cab drivers normally carry about $5 in change, and Hartsock says he thinks the increase in robberies could be because the holidays
are approaching and the thieves are looking for an easy way to get their hands on some cash.
Share this article: