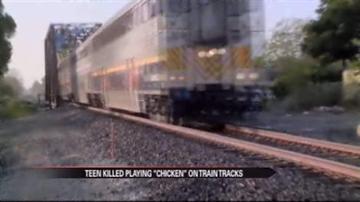 SAN LORENZO, Calif. — A 15-year-old in California was hit and killed by an Amtrak train.

The teen died while he and two friends were playing "chicken" in front of the train.

Officials say Austin Price and two other boys were on their bikes crossing in front of the train when Price was struck.

His friends said they often hung around the train tracks.

The two other boys were not hurt.