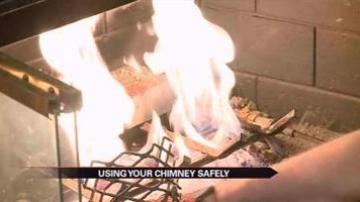 SOUTH BEND, Ind.-- Have you had your chimney cleaned in the last year? It's become part of T.J. Mcafoos' winter routine after his own chimney caught on fire.

"At the end of the year we went to build fire...within an hour there was this sound," said Mcafoos. "It sounded like a jet engine taking off in the living room and we realized there's gotta be a fire in the fireplace because all these flames were coming off the logs straight up."

He and his family had moved into a new home, and the family before only used the fireplace once each year on Christmas. Despite the limited usage, a fireplace can build up soot very quickly depending on the type of wood.

"The first thing we did was call the fire department," said Mcafoos. "Fortunately for us our next door neighbor was the fire chief for the local town so that helped."

But not everyone's so lucky! Annual chimney cleaning will cost you around $85 and save you the headache of a chimney fire. Gas fireplaces cause less chimney fires and are easier to clean.

"Cleaning is going to be easier on a gas fire place because you don't have all the soot buildups like you do when you burn firewood, said Tim Kuhbander, Michiana Chimney Sweeping and Repair.

In under a half-hour, Kuhbander cleaned Mcafoos' gas fireplace and checked the gas line connection.

"Today the logs just weren't set in the fireplace properly," said Kuhbander. "All the manufacturers have a specific way that they want the logs set so it burns good and looks nice."

Take it from someone who's been there- chimney fires are costly and often spread to the roof and rest of the house.

"No matter what you think it's always smart to just get it cleaned...you don't know what's going to happen or how much is built up in there," said Mcafoos. "It's just a good, smart thing to do."