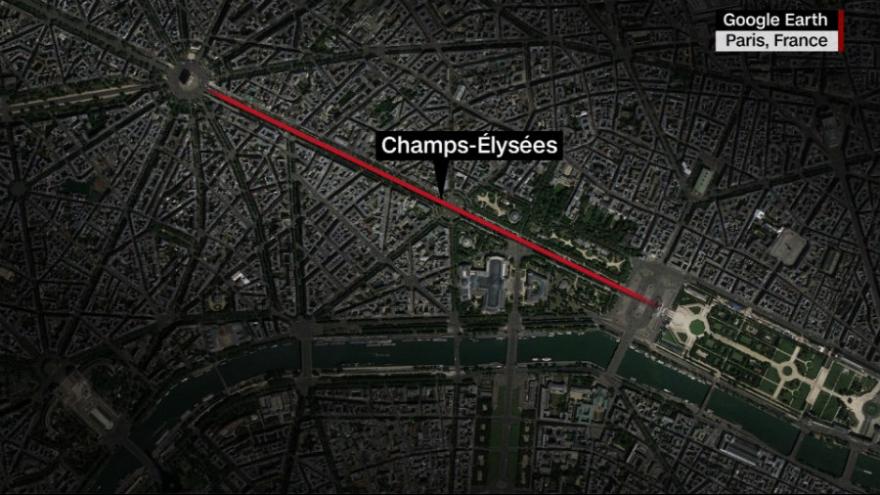 PARIS (CNN) -- Tourists strolling along Paris' famous Champs-Elysees on Monday afternoon watched in horror as a car rammed into a police van -- and some witnessed the car burst into flames as police grabbed the man inside and put him on the ground.

"We were waiting to cross the street and suddenly heard an explosion and the car was in flames," said Eugenio Morcilla, who captured video after the collision. "The police acted very quickly."

It's the latest in a series of terror attacks this year against security forces in the French capital. The Paris prosecutor's office has opened an anti-terror investigation.

"Once again, France's security forces have been targeted in an attempted attack on the Champs-Elysées," Interior Minister Gerard Collomb told reporters on Monday.

According to CNN affiliate BFMTV, the driver was under what is known as a "Fiche S" file, a French terror/radicalization watch list composed of thousands of names, of which some are under active surveillance. Active surveillance means that they are on law enforcement's radar, not necessarily under rigorous surveillance.

The incident, which took place at 3:40 p.m. local time (9:40 a.m. ET), began when a police squadron drove down the Champs-Elysses and an individual hit the first vehicle of the squad.

"The car contained weapons, explosives, enough to allow him to blow up this car," Collomb said.

The small white car caught on fire after the collision, but neither officers nor members of the public were hurt, an Interior Ministry spokesman said.

Morcilla, who was in Paris on vacation with his girlfriend, took video of the aftermath of the attack.

"They got out of a police truck and tried to break the glass and take the man out, they shot and threw tear gas and they took him out by force..." he said.

Security forces were working to identify the weapons in the vehicle, and they are investigating "the individual's past and see what motives pushed him to take action," Collomb said.

"This shows once again that the threat level in France is extremely high," the interior minister said.

Earlier, police advised people to avoid the area, as about 20 police vans and several armed officers surrounded the man on the ground.

It's the fifth time in four months that security forces have been attacked in the capital.

-- Last month, a man attacked an officer with a hammer at Notre-Dame Cathedral, proclaiming, "This is for Syria," Collomb said. The officer's injuries were not serious.

-- In April, a man shot at police officers -- also on the Champs-Elysees -- killing one officer and wounding two others. Police shot and killed Karim Cheurfi as he tried to escape on the busy tourist boulevard. ISIS said the man was one of its fighters, and Cheurfi had a note defending ISIS in his pocket.

-- In March, a man holding a gun on a French female soldier at Orly Airport shouted, "I am here to die in the name of Allah ... There will be deaths," before two of the soldier's comrades shot the attacker dead.

-- In February, a soldier shot a machete-wielding man who rushed toward a group of soldiers and guards near the Louvre museum.