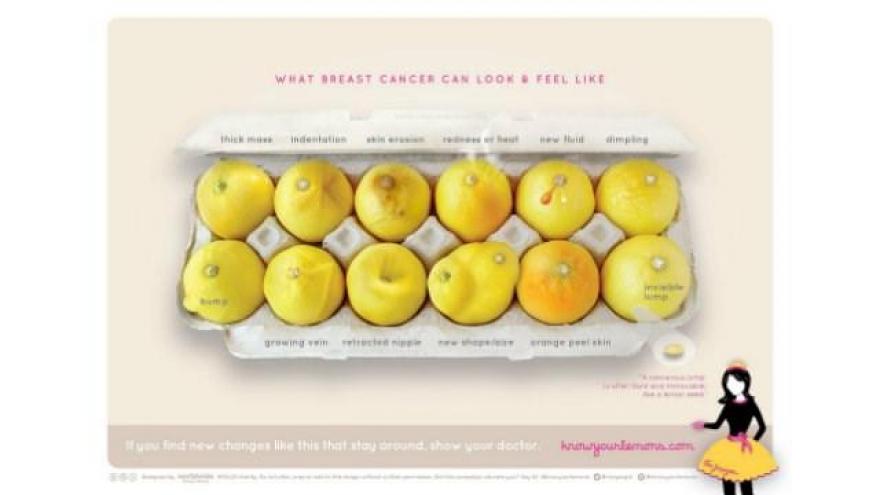 (CNN) -- When Erin Chieze saw an indentation on her breast in December 2015, her conclusion was immediate. "I instantly knew I had breast cancer," she wrote on Facebook, thanks to a breast cancer awareness photo a friend had shared.

"Had I not seen that photo, I would have assumed that it was an indentation from the underwire of my bra," Chieze, 38, a nursing student at West Hills College in Lemoore, California, told CNN.

Within five days of noticing the indentation, she was told she had breast cancer. A month later, doctors told her it was stage IV; the cancer had metastasized outside the breast.

"I knew all about self exams," Chieze wrote on Facebook last week, "but a picture of what to look for keyed me into knowing I had a terminal disease."

In telling her story, she found a similar photo online, an egg carton filled with lemons, on the website for a charity called Worldwide Breast Cancer. She shared it on Facebook with an impassioned call to promote awareness with useful, practical information.

When life gives you lemons

Corrine Ellsworth Beaumont, who launched the "Know Your Lemons" campaign and founded Worldwide Breast Cancer in 2014, lost both of her grandmothers to the disease. The second died while Beaumont was pursuing a master's degree in graphic design, when Beaumont was in her early 20s.

Uncertain of her own risk, she went off in search of more information. She found leaflets of older women "all smiling about breast cancer," she said.

"I couldn't relate to those materials," she said. "I didn't know what I should be looking for. What does a lump feel like, and when should I be screened?"

Then, in 2002, Beaumont had an idea. She started photographing pairs of different items to illustrate breasts: cantaloupes, flashlights, muffins. She tried to put herself in the patient's shoes, setting up a mock mammogram appointment and talking with women in waiting rooms.

Finally, she found the visual metaphor she needed.

"Everything clicked," she said. "They're just these yellow, friendly lemons."

The campaign includes three images: the carton of lemons, a lemon slice to illustrate breast anatomy and a flowchart of the steps it may take to receive a breast cancer diagnosis.

Beaumont says the lemons' appeal is the key to avoiding the censorship and fear issues that come with images of breast cancer.

"You can be incredibly detailed about symptoms without grossing people out," she said, recalling her experience looking at graphic breast cancer images online.

In the years since, the lemons have traveled to 70 countries in many languages. But it wasn't until this past week, when Chieze posted on Facebook, that they found overwhelming popularity.

The science behind the lemons

"It's all about knowing what changes to look for," said Dr. Andrea Barrio, a breast surgical oncologist at Memorial Sloan Kettering Cancer Center.

Barrio said the "Know Your Lemons" design illustrates how breast cancer symptoms can look very different depending on the type of cancer, how big it is and where it is growing.

Breast cancer often presents with a lump or a mass, but many cases, like Chieze's, have no detectable lumps at all. However, most lumps are not cancerous and may be related to pregnancy, cysts, lymph nodes and hormonal changes.

Although 80% of breast lumps are benign, said Barrio, they should always be checked out by a doctor.

The indentation Chieze noticed, Barrio said, may occur when cancer grows into the connective tissue that keeps the breast's normal shape and structure. These tissues, called Cooper's ligaments, tug on the skin from the inside as the tumor grows, creating a dimple.

An inverted nipple, said Barrio, can occur when the cancer invades the same connective tissue behind the nipple.

One lemon has clear and dark fluid leaking from the stem end. Certain growths, such as benign tumors that occur in the breast ducts, can irritate the milk lining, creating a clear or bloody discharge, said Barrio. Most often, the discharge comes from one nipple, not both.

A couple of the lemons show common signs of inflammation, such as redness and heat. With more advanced cancers, Barrio said, the breast may take on the appearance of what doctors call peau d'orange, French for "orange peel." As the tumor grows, it can cause fluid to build up in the breast, making pores appear dimpled on the inflamed skin, like an orange rind.

"Our breasts normally drain fluid, like water flowing through a river," she said. "A tumor can almost be like a dam."

The lemons also show how a growing vein may indicate tumor growth underneath. More advanced cancers can even begin to grow out of the skin.

"It can actually erode the skin, like a burn," Barrio said.

There are other cancer clues that are not illustrated in the viral graphic, according to Barrio. Rarely, cancers send cells up to the skin's surface, which can form tiny red skin nodules. Barrio said these can be easily mistaken for inflamed hair follicles at first, but they do not go away. Rashes caused by breast cancer can also be mistaken for eczema.

Despite the popularity of the graphic, Barrio said, most of the cases she sees are picked up by routine mammogram before a patient has any symptoms. In her work as a surgeon, she does not often see patients with the symptoms in Beaumont's graphic.

"But this can depend on screening and access to health care," she said, adding that in areas such as many of the developing countries where the lemons have been distributed, many patients do arrive at the clinic with visible symptoms.

Even then, Barrios cautions that a clear mammogram is not an all-clear.

"You can have a normal mammogram and still have changes that need to be looked into," she said

Her project will use similar images to prompt conversations between these patients and their doctors.

Of the recent attention to her Facebook post, breast cancer patient and nursing student Chieze said, she has had mixed emotions. Having to tell her story and explain her disease at length can be difficult.

"At the same time, being able to help someone along the way has been fantastic," she said.

Chieze, whose prognosis is uncertain but whose cancer is currently in remission, hopes that the renewed attention in this campaign will support the ongoing demand for research and resources for metastatic breast cancer patients. About 22% of these patients live five years past their diagnoses, according to the American Cancer Society.

"I can only touch so many patients in a single day," Chieze said, "but now I've been able to help people on a much larger scale."