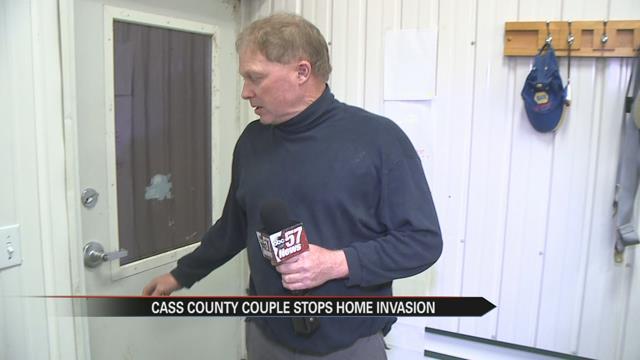 Two Dowagiac parents went above and beyond to protect their children during a home invasion on Tuesday night.

“It’s always a trip at the Malin house but I mean nothing like this has ever happened before,” said Anne Zebell, a family friend.

Zebell was at the Malin house Tuesday night for a sleepover but sleep was not part of this slumber party.

“I went outside, saw the office door open, told my husband and a little bit later, he went out to check and there was someone in the office,” said Leslie Malin.

“When I confronted him he said don’t make me shoot you and I just tackled him, luckily my wife was there to help me,” said Michael Malin, a Dowagiac parent.

“He said come sit on him,” said Leslie.

And for the next five minutes, the Malin parents did exactly that until the police showed up.

“He was face down, I had the left arm, the left leg and I was laying on top of him, holding his legs between my legs and his left arm,” said Leslie.

“I pulled his shirt over his head so he couldn’t get at me or get to a gun,” said Michael.

Luckily for the Malins, there was no actual gun, but the parents didn’t know that.

When the adrenaline kicked in protecting their 3 kids, 4 animals and their daughters’ friend was the only thing on these parents mind.

“No doubt. I told the police officers I’m protecting what’s in that house right there,” said Leslie.

The Malins prevented the suspect from walking away with a pile of computers and toolkits from their landscaping business.

"I was really surprised, I never thought anything like this could happen to us, not with three dogs,” said Michael.

But the dogs weren’t much help.

“I always thought our dogs would pull through in a time of need.  Nope. I think I need new dogs,” said Leslie.

But they were part of the reason the Malin parents did what they had to do.

“Protecting the family was what it was all about,” said Leslie.

Brittany Malin, their daughter, said she was proud of her parents but not surprised that they did all that.

Her two brothers slept through the whole thing.