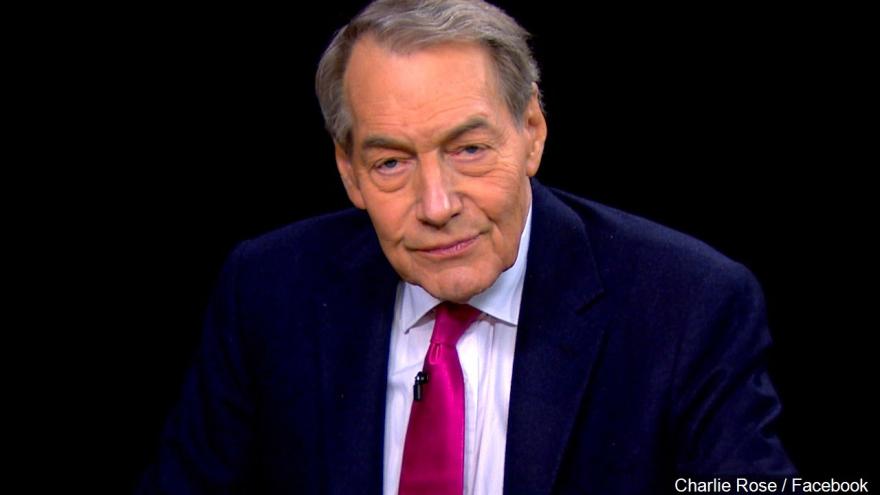 (CNN Money) -- CBS News and PBS both said Tuesday that Charlie Rose's contracts with them had been terminated.

An internal memo at CBS, which announced its move first, said the decision "followed the revelation yesterday of extremely disturbing and intolerable behavior."

On Monday The Washington Post published a 5,000-word story about alleged harassment by Rose, based on interviews with eight women who described "unwanted sexual advances."

Rose said in a statement that he "deeply apologized" for what he admitted was "inappropriate behavior."

After the initial Post story came out, other women came forward with additional allegations of sexual misconduct. By Tuesday morning, CBS executives determined that it was impossible for him to return to "CBS This Morning," the daily broadcast he has co-hosted for the past five years.

CBS did not immediately name a replacement for Rose on the program.

Later in the day, CBS reported that some of the new complaints against Rose were lodged by colleagues within its news organization.

"At least three women who asked not to be identified said they experienced unwanted sexual contact from Rose while working at CBS News," Bianna Golodryga reported on the "CBS Evening News."

She added: "Two of the women who came forward at CBS say they are not ready for the details of their allegations to be made public. But a third woman alleges Rose whispered a sexual innuendo while touching her inappropriately at a work-related event."

Golodryga said "we reached out to Charlie and have not heard back."

"As personal as this story is, we will continue to cover it here, diligently, at CBS," Golodryga said.

There are questions swirling about who knew what when at CBS.

The revelations about Rose have also been embarrassing for PBS, a distributor of his eponymous talk show.

"In light of yesterday's revelations, PBS has terminated its relationship with Charlie Rose and cancelled distribution of his programs," the public broadcaster said less than an hour after CBS terminated him.

"PBS expects all the producers we work with to provide a workplace where people feel safe and are treated with dignity and respect," the broadcaster said in a statement.

That wasn't the extent of the fallout for Rose. On Tuesday, the Diocese of Rockville Centre, on Long Island, said it had decided to rescind an award it planned to give him.

Related: CBS' Norah O'Donnell: 'This has to end. This behavior is wrong'

"Charlie does not get a pass here. He doesn't get a pass from anyone in this room," King said. "We are all deeply affected. We are all rocked by this."

"This will be investigated. This has to end. This behavior is wrong. Period," O'Donnell said.

It is unknown if CBS is commissioning a formal investigation into who knew what about the misconduct allegations, and when they may have known it.

A CBS News spokeswoman did not immediately respond to a request for comment about that.

"CBS News has reported on extraordinary revelations at other media companies this year and last. Our credibility in that reporting requires credibility managing basic standards of behavior. That is why we have taken these actions," CBS News president David Rhodes said in the internal memo.

A short time ago we terminated Charlie Rose's employment with CBS News, effective immediately. This followed the revelation yesterday of extremely disturbing and intolerable behavior said to have revolved around his PBS program.

Despite Charlie's important journalistic contribution to our news division, there is absolutely nothing more important, in this or any organization, than ensuring a safe, professional workplace—a supportive environment where people feel they can do their best work. We need to be such a place.

I've often heard that things used to be different. And no one may be able to correct the past. But what may once have been accepted should not ever have been acceptable.

CBS News has reported on extraordinary revelations at other media companies this year and last. Our credibility in that reporting requires credibility managing basic standards of behavior. That is why we have taken these actions.

Let's please remember our obligations to each other as colleagues. We will have human resources support today and every day, and we are organizing more personal and direct training which you will hear about from senior management shortly.

I'm deeply disappointed and angry that people were victimized—and that even people not connected with these events could see their hard work undermined. If all of us commit to the best behavior and the best work -- that is what we can be known for.