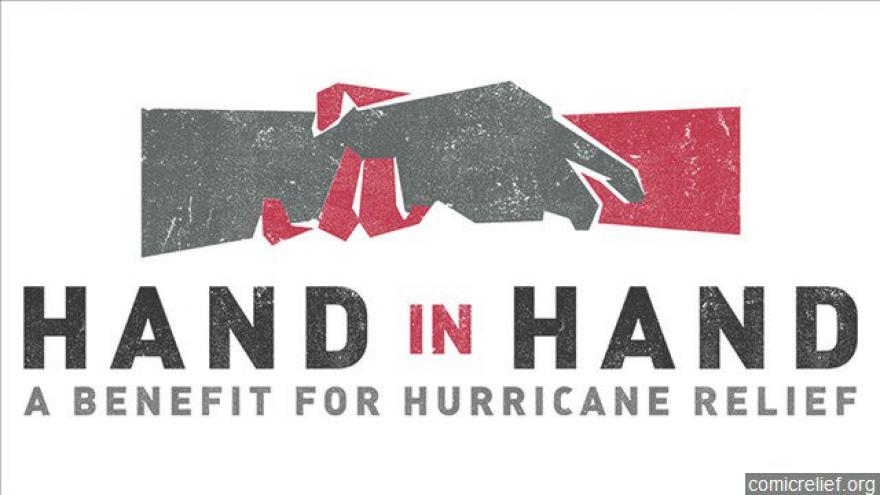 He has enough food and his phone works, but there's no electricity and the temperatures continue to hover in the high 80s and 90s.

"You know how hot it gets," Leno told CNN backstage at the "Hand in Hand" benefit, a one-hour, celebrity-packed telethon that aired Tuesday to raise funds for those affected by Hurricanes Harvey and Irma.

But, said Leno, "He got through WWII, he can get through this."

Getting through it is just the start for those affected.

Hurricane Harvey devastated Texas and Louisiana over a 6-day period, with losses estimated to be as much as $75 billion.

The full scale of Hurricane Irma's impact is still being accessed. There have been at least 24 Irma-related fatalities in the United States, including Puerto Rico and U.S. Virgin Islands. And on Tuesday, the Federal Emergency Management Agency said an estimated 25% of houses in the Florida Keys were destroyed and another 65% suffered major damage.

The telethon, which aired across 15 networks and streamed online, included performances from Stevie Wonder, Usher, Blake Shelton, Tori Kelly, and Luis Fonsi. Texas native George Strait, joined by some of his fellow country artists, was the last performance of the night. The set included a medley of songs live from San Antonio, including Strait's song "If It Wasn't for Texas."

At the close of the show, Billy Crystal put the total raised at more than $14 million, with that number expected to climb. The special will air on a delay on the west coast.

Organizations benefiting from money raised by the telethon include Habitat for Humanity, Save the Children, the Rebuild Texas Fund, and the ASPCA.

Tuesday's program highlighted survivor and victim stories, as well as tales of heroic saves by first responders and ordinary people alike. Among them was the story of a group of people who formed a human chain to save an elderly man from his submerged vehicle during the worst of Harvey's flooding.

"If there's one silver lining, it's the fact that people are helping one another," Leno said.