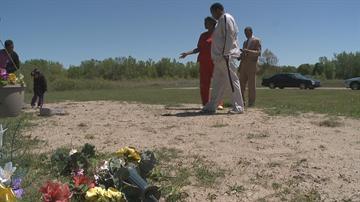 BENTON HARBOR, Mich. - A family doesn’t know where their mother is buried more than five months after she passed away.

The Crystal Springs Cemetery in Benton Harbor says they know where the tomb of Ruth Nichols is, but it’s not in the spot where the family remembers her being buried.

At a cemetery board meeting this week Crystal Spring’s Cemetery Chairman told the family they’d need to pay for the proof.

“My mother is out here,” said Jaclyn Ingram. “Where? We don’t know,” she said as she pointed to the spot she remembers Nichols being buried in November of 2011.

“I remember the hole here,” Ingram said pointing to an unmarked patch of dirt near the back of the cemetery.

In February Ingram and her family went back to Crystal Springs to measure the plot in preparation for buying a tombstone. Ingram said that day the cemetery told them they had no record of Nichols being buried there.

Ingram was told by the cemetery later, that the plot had been found and was marked by a broomstick in the ground. The broomstick has since disappeared and, she says, every time the family puts flowers on the site they’re moved away.

Thursday there were other markers pointing out gravesites nearby but not where the family remembers the hole.

Ingram wants some proof. “Dig the ground, remove the vault, open the vault top and show us our (mother’s) casket,” she said. “That’s all we want.”

“It’s an absurdity,” said Dennis Knowles, who sits on the cemetery board. Knowles said Crystal Springs has an obligation to the family given the confusion. “When you have your loved one going in the ground, you do need to know exactly where they are,” he said.

According to Knowles and the family, Tuesday, Cemetery Chairman Darwin Watson said the family is required to get permits and pay for proof of the burial.

Watson did not return phone calls made by ABC 57 as of Thursday night.