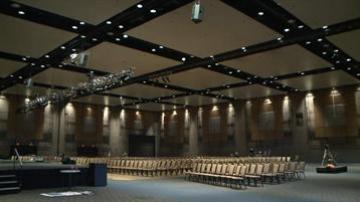 SOUTH BEND, Ind. -- Jason Walker is a street musician. He beats his drums for anyone who will listen.

But in downtown South Bend, those people are few and far between, which is why he thinks places like the Century Center could do a better job of attracting more visitors.

"They're doing pretty good," Walker said. "But they can always do better."

And he's not alone.

The city gave a favorable reccomendation for an outside company to take over operations.

Currently, the center loses more than $1 million a year. That loss of money and people has a direct effect on area businesses.

"There's a lot of places that should be down here that are not," Donald Willman, an employee at Imagine That Toy Store, said.

He depends on foot traffic from convention center visitors.

"They come in, and they're looking for places to shop, and as far as retail goes, we're pretty much it," Willman said.

But a lack of retail shops didn't stops folks like Patti Wheater from holding her conference at the Century Center.

"It was very reasonably priced," Wheater, who works with Pride Youth Programs, said.

The group is based in Michigan and does peer-to-peer outreach work. They target at-risk teens in an effort to keep them from abusing substances.

She picked South Bend after researching the area.

"If people feel comfortable in the city, if they feel like they have things to do, and they're safe, I think that definitely makes for happier conference attendees," Wheater said.

So if folks like her and Jason are expected to keep on coming back, the city and the Century Center need to hit all the right notes.