PORTER, Ind.—Visitors will see a few changes to the newly designated Indiana Dunes National Park for the 2019 season.

“Everyone’s asking when are the signs going to change,” said Bruce Rowe, a supervisory ranger at the Indiana Dunes National Park.

While many current signs still read “national lakeshore” there are plans to update them. Rowe says the park service is waiting until late May to hold a dedication ceremony for the new name.

Beyond updating signage, Rowe says there are a lot more calls to the visitor center from people all over the country seeking information about the new national park.

“They’re calling to find out how to come camping here, how to explore the park, they want maps, they want information about this special place,” Rowe said.

According to Rowe, over the last several years, the park has brought in between 1.7 and 2.1 million visitors per year. He says there are also about 10,000 overnight campground stays per year.

Rowe believes the name change will increase those numbers.

“It really gives this place a lot more prominence. There’s a lot of the public that never understood our national lakeshore name but they understand how special a national park is. I think we’re going to see a lot more people coming out,” Rowe said.

A new system to handle the crowds

To increase access to campgrounds, particularly to out of state visitors, the National Park Service is proposing a new campground reservation system.

The online tool would place half of all campsites at Dunewood Campground on a reservation system, allowing visitors to lock in their plans up to six months in advance.

The new system would be paid for using the existing $25 per night campsite fee and would not increase camping fees.

“The Indiana Dunes Dunewood Campground has always been a first come, first serve campground. That works well for local folks but other people coming from out of state wouldn’t come all this way and risk not finding a campsite,” Rowe said.

Rowe says the visitor center has already received a few calls from people concerned with campgrounds filling up far in advance for popular weekends such as the 4th of July.

The park is holding a month long public comment session, inviting feedback on the proposed system.

Here are a few ways to share your feedback with the national park. All comments must be submitted by April 30. 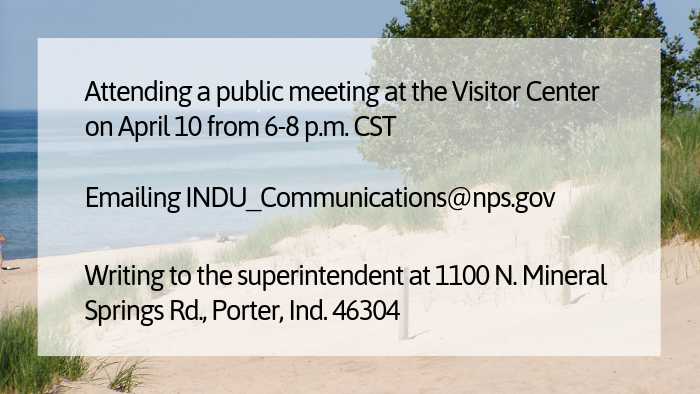 A few fun additions for the 2019 season

While unrelated to the name change, the Indiana Dunes National Park will see a few new attractions this season.

Little Calumet River will be open to kayaking and canoeing. The Northwest Indiana paddlers have worked with the park over the last few years to clear log jams in order to make way for the activity.

Guided programs and rentals will be available.

The Northwest Indiana Symphony will be out on West Beach in August for a concert.

Rowe says the park is also working to decrease parking issues at the beach by expanding the pilot shuttle program in conjunction with the South Shore Line.

A bus will be available at a few locations to pick up visitors from train stations, coming from both South Bend and Chicago directions, to head to the beach.