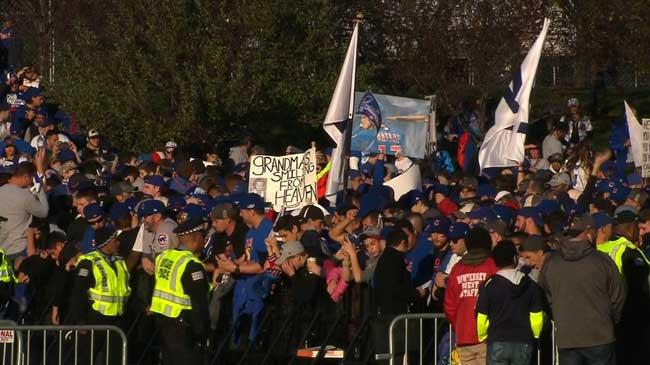 (CNN) -- This was the parade that will "stand the test of time," as Chicago's mayor put it.

An estimated five million people swarmed city streets and sidewalks Friday -- some standing since well before sunrise -- hoping to catch a glimpse of the Chicago Cubs team that won its first World Series title in 108 years this week.

Finally, the wait was over.

Cubs players stood on double-decker buses with their families in the late morning, waving at cheering throngs of people. The city asked crowds to gather downtown for the official parade, but some couldn't resist lining much of the five-mile route that the buses took to get there from Wrigley Field.

Later, a sea of fans -- many wearing Cubbie blue -- attended a rally at Grant Park. Some waved replicas of Cubs' iconic "W" flag, which Wrigley Field flies after the team wins a game.

Cubs president of baseball operations Theo Epstein told the crowd the team had finally won a championship "for you guys and for each other."

Cubs catcher David Ross, who at 39 played his final game in the World Series, took a selfie with the throngs in the background.

Players reminisced about the now-famous inspirational team meeting in the locker room during the 10th inning rain delay in Game 7 and first baseman Anthony Rizzo blaring Rocky movies in the clubhouse during the series.

Rizzo, who immediately pocketed the game ball after the historic final out, presented the keepsake to team owner Tom Ricketts.

"This is part of history forever," he said.

School? Work? Forget about it. Not in Chicago Friday.

Jeff Brenneman, a 34-year-old lifetime Cubs fan, awoke at 4:30 a.m. at his Northside home to get downtown two hours later, and Congress Parkway already was packed.

"I think my boss would have been shocked if I hadn't asked for time off," Brenneman said.

"People started gathering shortly after midnight is what I'm told," he added.

Many children were also there -- some of them, but not all, skipping class. As luck would have it, Friday is a previously scheduled day off for Chicago Public Schools.

Before the motorcade left for the rally, the players enjoyed themselves at the stadium.

Ross posted a picture of him and his family in the clubhouse to Twitter.

"Who's ready for the parade?" he wrote.

Kyle Schwarber, the outfielder who came back from a serious April knee injury to hit .412 for the Cubs in the postseason, told MLB Network at Wrigley that he was excited for the parade.

"It's going to be crazy for us, especially for the young guys who haven't experienced it," said Schwarber, 23.

Mayor Rahm Emanuel said the city would throw a celebration "worthy of the history the team made" Wednesday in Cleveland, where the Cubs beat the Indians 8-7 in 10 innings of the World Series' deciding game.

"2016 is the year for the Cubs and the generations of fans who have been waiting to fly the World Series W," Emanuel said. "Go Cubs go!"

Not everyone there was a Cubs fan. A Chicago White Sox supporter told CNN affiliate WGN that he was there, wearing a Cubs jersey, because he'd lost a bet.

"I feel a little dirty, but I'm happy for the Cubs right now," the man, who identified himself only as Chris, said. "Hey, you know what? Congratulations to the Cubs."

CNN's Ray Sanchez and Alex Leininger contributed to this report.