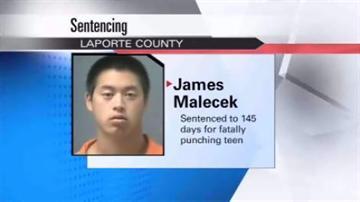 LA PORTE COUNTY, Ind. — A 20-year-old man from Chicago will spend 145 days in jail for punching a teen to death on a La Porte County beach.

James Malecek pleaded guilty to a felony charge of involuntary manslaughter in the death of Kevin Kennelly Jr.

Malecek punched Kennelly as Kennelly was trying to break up a fight. It occurred during a Fourth of July party on Long Beach in 2011.