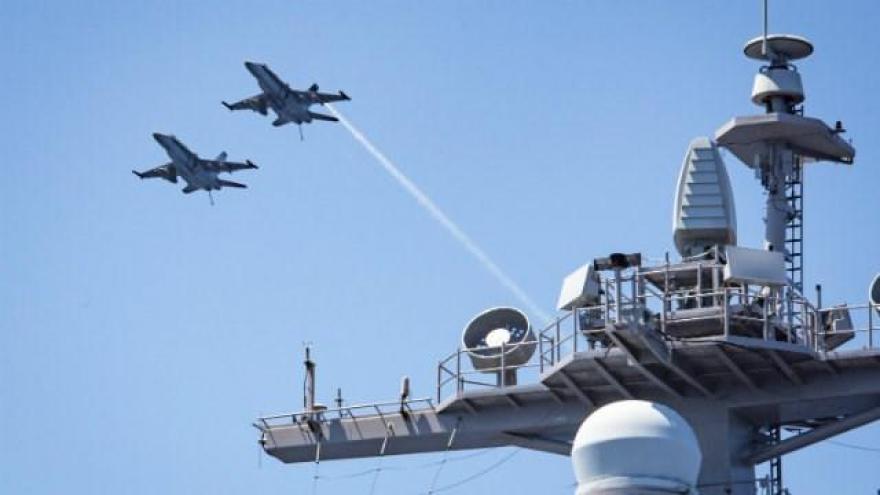 WASHINGTON (CNN) -- Chinese officials warned a US military aircraft flying near South Korea Sunday, telling its pilots that they were illegally operating in Chinese airspace and ordering the American plane to leave, a US defense official told CNN.

The pilots of the US Air Force B-1B Lancer bomber responded to the Chinese air traffic controllers, saying that they were conducting routine operations in international airspace and did not deviate from their flight path, according to US Pacific Air Forces spokesman Maj. Phil Ventura.

The bombers had entered a controversial Chinese Air Defense Identification Zone (ADIZ) in the East China Sea, which covers a disputed island chain and overlaps with airspace claimed by Japan and South Korea.

The ADIZ declaration required airlines flying over the designated waters to first notify Chinese authorities before transiting. The US and Japanese governments do not recognize China's claim on the area.

"Pacific Air Forces ... did not recognize the Chinese Air Defense Identification Zone (ADIZ) when it was announced in November of 2013, and does not recognize it today," Ventura told CNN.

"The ADIZ has not changed our operations."

On Thursday, China's Ministry of Foreign Affairs spokeswoman said she wasn't aware of the specific incident but said that setting up an ADIZ was the right of a sovereign nation.

"The United States has its own ADIZ. The US should respect the right of other countries to set up ADIZ," spokeswoman Hua Chunying said.

China established the zone despite objections from Tokyo and Washington. A US report from last year suggested that it was not being fully enforced.

Tensions have flared numerous times over the Senkaku Islands, which China calls Diaoyu Islands, including face-offs between Japanese and Chinese warplanes and ships.

The US plane was flying 70 nautical miles southwest of South Korea's Jeju Island.

According to the US Air Force, the Guam-based B-1 bomber was conducting a series of training missions with Japanese and South Korean military aircraft.

"Our increased cooperation enables our combined forces to rapidly react to counter aggression against Japan and other allies and partners," said US Maj. Ryan Simpson, the Pacific Air Forces bomber operations chief, in a statement announcing the training mission.