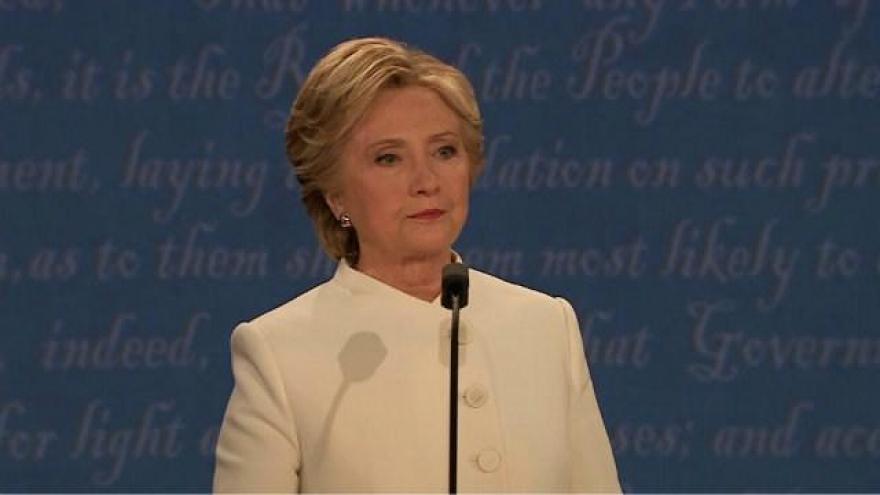 (CNN) -- Hillary Clinton's email controversy roared back to the forefront of the presidential campaign Friday when FBI Director James Comey told lawmakers the bureau is reviewing new emails related to her personal server.

The revelation -- 11 days before the election and nearly four months after Comey said he wouldn't recommend criminal charges because of Clinton's use of the server -- shook the Democratic nominee's campaign. She forcefully called on the FBI to release the "full and complete facts" about its review.

"Voting is underway, so the American people deserve to get the full and complete facts immediately," Clinton said at a brief news conference in Des Moines, Iowa, adding it was "imperative that the bureau explain this issue in question, whatever it is, without any delay."

Clinton said she was "confident whatever (the emails) are will not change the conclusion reached in July," when Comey said he wouldn't recommend criminal charges in the matter.

Republican nominee Donald Trump, who has spent the past several weeks on defense, seized on the issue.

"Hillary Clinton's corruption is on a scale we've never seen before," Trump said at a rally in Manchester, New Hampshire. "We must not let her take her criminal scheme into the Oval Office."

He later responded to Clinton's statement, saying she "tried to politicize the investigation by attacking and falsely accusing the FBI director of only sending the letter to Republicans."

In a letter to eight congressional committee chairmen Friday, Comey said investigators are examining newly discovered emails that "appear to be pertinent" to the email probe.

"In connection with an unrelated case, the FBI has learned of the existence of emails that appear pertinent to the investigation," Comey wrote the chairmen. "I am writing to inform you that the investigative team briefed me on this yesterday, and I agreed that the FBI should take appropriate investigative steps designed to allow investigators to review these emails to determine whether they contain classified information, as well as to assess their importance to our investigation."

Comey later explained his decision to provide Congress with the information in a letter to FBI employees.

"We don't ordinarily tell Congress about ongoing investigations, but here I feel an obligation to do so given that I testified repeatedly in recent months that our investigation was completed," Comey said. "I also think it would be misleading to the American people were we not to supplement the record."

The newly discovered emails are part of an investigation into Anthony Weiner, according to law enforcement sources. Weiner, the disgraced former congressman, recently separated from top Clinton aide Huma Abedin after a sexting incident.

The emails in question were sent or received by Abedin, according to a law enforcement official. There were a "considerable number" of emails being reviewed from at least one device shared by Abedin and Weiner, the official said. A separate official described it as thousands of messages.

The FBI is looking at whether any of the newly discovered emails will have an impact on the now-closed investigation into Clinton's server. In his letter, Comey said he was not sure how long the additional review would take and said the FBI "cannot yet assess whether or not this material may be significant."

The big question is whether the return of the email storm, which has overshadowed her entire campaign, will have an impact on any remaining undecided voters. Before the latest controversy erupted, Clinton had the advantage in the race for the 270 electoral votes needed to capture the presidency. She is leading Trump by six points in CNN's Poll of Polls.

Comey is under withering criticism from the Clinton campaign and congressional Democrats for releasing the letter so close to the election. Earlier Friday, Clinton campaign chairman John Podesta said "it's extraordinary that we would see something like this just 11 days out from a presidential election."

Dianne Feinstein, the California Democrat who is the vice chairman of the Senate Select Committee on Intelligence, said she was "shocked" to read Comey's letter.

"Director Comey's announcement played right into the political campaign of Donald Trump," she said in a statement.

Even Republican Sen. Ron Johnson of Wisconsin urged Comey to provide more information: "In line with your commitment to be transparent with Congress and the public, I respectfully request that the FBI provide as much information as possible about these new developments without harming the integrity of its ongoing investigation," Johnson wrote in a letter to Comey.

The FBI chief felt he had no choice but to tell Congress now or risk being accused of hiding relevant information before the election, law enforcement officials said in explaining the timing. The letter was "carefully worded," one of the officials said.

The news united Republicans who have spent the past several weeks grappling with Trump's controversies. Speaker Paul Ryan jumped on Comey's announcement to blast Clinton.

Trump's campaign manager, Kellyanne Conway, tweeted after the news broke, "A great day in our campaign just got even better."

"This decision, long overdue, is the result of her reckless use of a private email server, and her refusal to be forthcoming with federal investigators," Ryan said in a statement. "I renew my call for the Director of National Intelligence to suspend all classified briefings for Secretary Clinton until this matter is fully resolved."