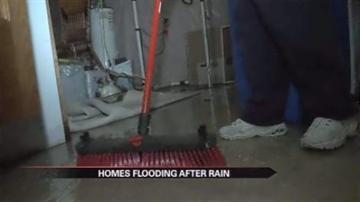 SOUTH BEND, Ind. -- Flooding concerns continue for one South Bend neighborhood.  Residents in the Rum Village area are dealing with flooded basements again and this time they are demanding the city do something about it.

The whipping winds and rain are causing one soggy situation in Ruth Kinecses basement.

"This morning at seven in the morning when I went downstairs there were two to three inches of water in the basement," said Kinecses.

Kinecses says this is the first time she has had flooding in her basement.  She blames the closed ethanol plant across the street.  She says since the pumps stopped working, her basement has been a big wet mess.

Now she wants the city to take care of the problem.

"If they could turn the pumps on at the ethanol plant, at least until we get through spring," said Kinecses.

Kinecses and I called Councilman Oliver Davis and he rushed right over to take a look at the flooding.

"That is terrible," said Davis.

Davis says he has been getting calls non-stop about flooding from people who live near the plant.

"It's not only one home, it's not only two homes, it's a whole neighborhood," said Davis.

Davis says he has seen so many flooded homes in his district, he wrote this letter to the mayor to make sure this issue is pushed to the forefront.

"I have sent Mayor Pete Buttigieg a letter asking him to come out here to the Rum Village area so he can get a first hand look at the situation," said Davis.

Kinsces says she doesn't care who fixes the flooding. She just wants it taken care of before it gets any worse.

"When the snow melts, it is going to go right back down to the basement," said Davis.

ABC57's Jessie McDonough called over to the Mayor's office and talked to his chief of staff Mike Schmul.  He said the flooding issue is a top priority.

He also said the mayor has the public works department monitoring the water table and they are also keeping an eye out for who buys the ethanol plant.  They are hoping the pumps will be up and running soon.

There will be a meeting about the flooding February 7th.