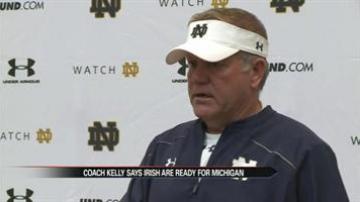 While there were many internet rumors saying the results of that investigation would be made at that press conference, Coach Kelly assured that was not the case.

Although if it does conclude by Friday and the players are not suspended, they will get the green light for Saturday's showdown against Michigan.

"If I got them back tomorrow they'd play on Saturday. I could get them ready. Right away," says Kelly.

With the game Saturday night under the lights and being the final scheduled game between the two powerhouse universities, Kelly says he expects a special sort of buzz to fill the atmosphere.

While in most cases the bragging rights carry over to the next year, this time there is no next year which makes Saturday’s showdown so important for fans on both sides.

"I think it's going to be awesome. This game has always created a buzz here. But, with it not being played again for awhile I think there is added attention to it," says Kelly.
Share this article: